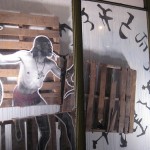 I’ll be the first to say that I’m not a huge fan of Seattle’s Belltown neighborhood. Sure, there are a few cool things like Shorty’s, Roq La Rue, and The Big Picture, and it was once (or perhaps soon again) the home of the legendary Crocodile Cafe. Sure, sure. But for every one of those cool things comes one annoying, expensive, hoity-toity club or restaurant. It’s probably one of the places in Seattle I’d least like to spend my time in.

Nonetheless, Free Sheep Foundation has opened up a new gallery in the husk of an abandoned building in Seattle’s Belltown neighborhood. The location is just a couple blocks from the Roq La Rue / BLVD Gallery section of Belltown, and they are [temporarily?] doing some pretty amazing things in this stripped down space.

I’ve been sitting on these pictures forever and this opening was earlier this month, but I hope you enjoy them, weeks later. Experimental music takes the stage in one of the back rooms.

Click here to view more about the gallery. Hollar.