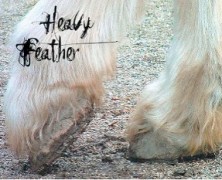 Heavy Feather’s debut album sounds like a work in progress. Although the members of Heavy Feather clearly have experience, made obvious by their musical abilities, there’s a general lack of cohesion throughout the album. It seems like they each had several ideas that they all really wanted worked into the album, causing things to get out of control. Perhaps this can be attributed to inconsistent vocal styles as well as the band’s struggle to embody and emulate such a wide array of musical styles that the end result is confusing. My subsequent listens did not reveal more consistency; there needs to be more focus and less stylistic diversity to make Heavy Feather’s music more striking and enjoyable. Most of their tracks have catchy and predictable rhythms, and the music is mostly upbeat, but not much is striking or enjoyable, save for a song or two.

It’s no coincidence that their oxymoronic band name is a nod to ’70s psychedelic rock. For instance, there’s Velvet Underground, Led Zeppelin, Iron Butterfly, Black Sabbath and… Heavy Feather. Including your band in the genre with those heavyweights seems a bit overzealous, and in Heavy Feather’s defense, the album strives to maintain ’70s rock overtone throughout. But then, too many other genres get mixed in.

The more upbeat, catchy songs provide grinding and bouncing guitar sounds. There are moments where nods to Black Sabbath can be detected. I swear I heard some Big Brother and the Holding Company too. A few songs in, though, the ’70’s sounds minimize and some ’90s sounds become more dominant. “Deciduous” has a distinct Soundgarden feel, circa Bad Motorfinger. The sludgy guitars and repetitive, deep drum sounds are unmistakably familiar. But as each song or two progresses, you get a whole new style, a whole new sound. The album opens with poppy vocals and psychedelic music, then ’90s sludge influences, then hints of The Pretenders, The Pixies, Elliot Smith… and it just gets confusing. The vocals are equally unimpressive and just as stylistically scattered as the instrumentation. One minute I hear Courtney Love during her years with Hole, the next minute I hear Alanis Morissette, and the next minute bubble gum Stereolab harmonies. I wouldn’t mind leaving some of those vocals behind forever.

Though catchy, this album never caught me. What I did hear in some of the songs is an excellent opportunity to play around with soundtrack music. A few songs on the album are almost entirely instrumental, spacey, mellow, and experimental. These few songs provide Heavy Feather with a great platform. And luckily for them, they already have two tracks which will be included in two soon to be released films.

As for future albums, though, I hope Heavy Feather compose their style by utilizing more of their own.