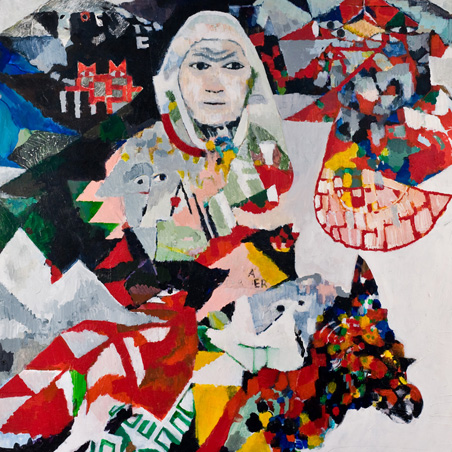 Whether you hated them or loved them, in the early 00’s, The Blood Brothers were THE It Band of the hardcore scene. Wild, uncontrollable, unpredictable, and highly intelligent, the band quickly amassed a devoted following, praised by the die-hard fans for their originality and irreverent approach to punk rock, all the while attracting hordes of mainstream followers with their hyperactive showmanship (read: Johnny Whitney dancing around in his skinny jeans). Alas, via a single, unceremonious forum post, the hottest band in Seattle went out, not with a bang but with a whimper, all their noise and fury silenced by an anti-climactic “creative differences” and “thanks to all the fans” memo — a final message that has graced the tombstones of countless less worthy bands.

But while vocalist Jordan Billie was adamant in declaring that he “couldn’t imagine trying to work on another record with that band,” here we find his new project, Past Lives, featuring three other members, all formerly of the Blood Brothers. Not present this time around are vocalist and organist Whitney and guitarist Cody Votolato, replaced by original guitarist and old friend Devin Welch. And it sounds like you’d expect: a more subdued, more careful, more mature Blood Brothers. But is an older Blood Brothers a better Blood Brothers?

Tapestry Of Webs‘ best moments occur when the band truly allows themselves to be frenetic. Songs like “Hex Takes Hold” and “Falling Spikes” are chunky and immediate reminders of how the formula can work and work well.1 Even songs like “Aerosol Bouquet” are satisfying slow burners. “K Hole” is the standout, a torrent of angular carnage and righteous fury. There are songs on this album that augment a familiar sound and again twist genre conventions to create really captivating works.

But the lows! Oh, the lows. “Don’t Let The Ashes Fill Your Eyes” is a boring droner of a song, filled with half-hearted “Ooh-la-la”‘s and a beat that is like a black hole of fun. And it’s immediately followed by another quiet little nothing, “Deep In The Valley.” Again, the song goes on and on and on without anything remotely rewarding coming from them. They come and then they leave, doing nothing and leaving no mark. They’re completely empty. The Blood Brothers would’ve taken a song like “There Is A Light So Bright It Blinds,” ripped out its innards, and shown them to your mother. Past Lives, however, approach the song so earnestly and without any sort of detectable disdain, that it’s kind of confusing and disappointing.

The Blood Brothers had a focused mission, tearing away (through intentional means or not) the false dichotomy of underground “realness” and mainstream “fakeness.” They were about celebrity and glamour via the ugliest, most abrasive method possible, pomp and circumstance by way of filth and swine. Past Lives, on the other hand, seem a bit lost at sea; the band finds solid ground at times but loses direction and momentum in others. Tapestry Of Webs is a rebuilding effort — an album with promise, but one that doesn’t quite deliver. And though these songs are growing pains caught on tape, I look forward to what’s in store.

[1] “Falling Spikes” sounds eerily like the music from Stage 4 in Castlevania. Look it up!

I wish the album were exploratory and amazing! They seem to be exploring two types of territory on this album: old BB stuff (the good stuff) and new soft rock boring stuff (the bad stuff). Again, it feels like ToW is just the BB’s being comfortable with their new lineup, throwing shit at the wall and seeing what sticks. And I’m saying theres stuff that’s sticking! Just not all of it.

Vivian Hua
Reply to  A Huang

for me personally, i’m not expecting the blood brothers, but there are definitely some songs on the album i cant quite stand (mostly “don’t let the ashes fill your eyes”). but i think the parts that are good are REALLY good, and outweigh the bad, definitely. i keep getting “falling spikes” stuck in my head, and considering it’s not like a pop song of any sorts, it’s pretty remarkable it’s in my head non-stop!

I still think it’s a pretty solid start. You can’t compare them to the Blood Brothers as much as you are because that totally defeats the purpose of what Past Lives is trying to be. Musicians change and explore new avenues. Maybe they’re not trying to be anything and that’s why this album is so damn exploratory and amazing. Try to tell me that Tapestry of Webs didn’t make you do a double take and question what is real?