Early on in Beans— a coming-of-age film written and directed by Quebec-based Mohawk filmmaker Tracey Deer — a teenage girl and her mom shimmy under their seatbelts and sing along to Snap!’s “The Power” on their way to a protest. This scene vividly encapsulates the energy in the air during the early days of the 1990 Oka Crisis. Incited by the decision of the Quebec government to allow a golf course to be built on the site of a Mohawk burial ground, the event provides the backdrop for Deer’s propulsive and sensitive film, which follows a thirteen-year-old Mohawk girl named Tekehentahkhwa (Kiawentiio Tarbell), nicknamed Beans, through that tumultuous summer.
The contested site, which includes the town of Oka, has traditionally been home to the Mohawk people but lacks the legal status of a reserve. A 90-day struggle, which included numerous blockades of roads as well as racist incidents like the burning of Mohawk effigies by townspeople, ensued.
Beans successfully juggles a variety of tones, from playful to jaw-dropping, but never feels like just another textbook history lesson. By giving space to both Beans’ burgeoning social consciousness and occasional adolescent recklessness, the film reinvigorates familiar coming-of-age tropes. In so doing, it reimagines a fascinating episode in Canadian Indigenous history through a thirteen-year-old’s unjaded eyes. 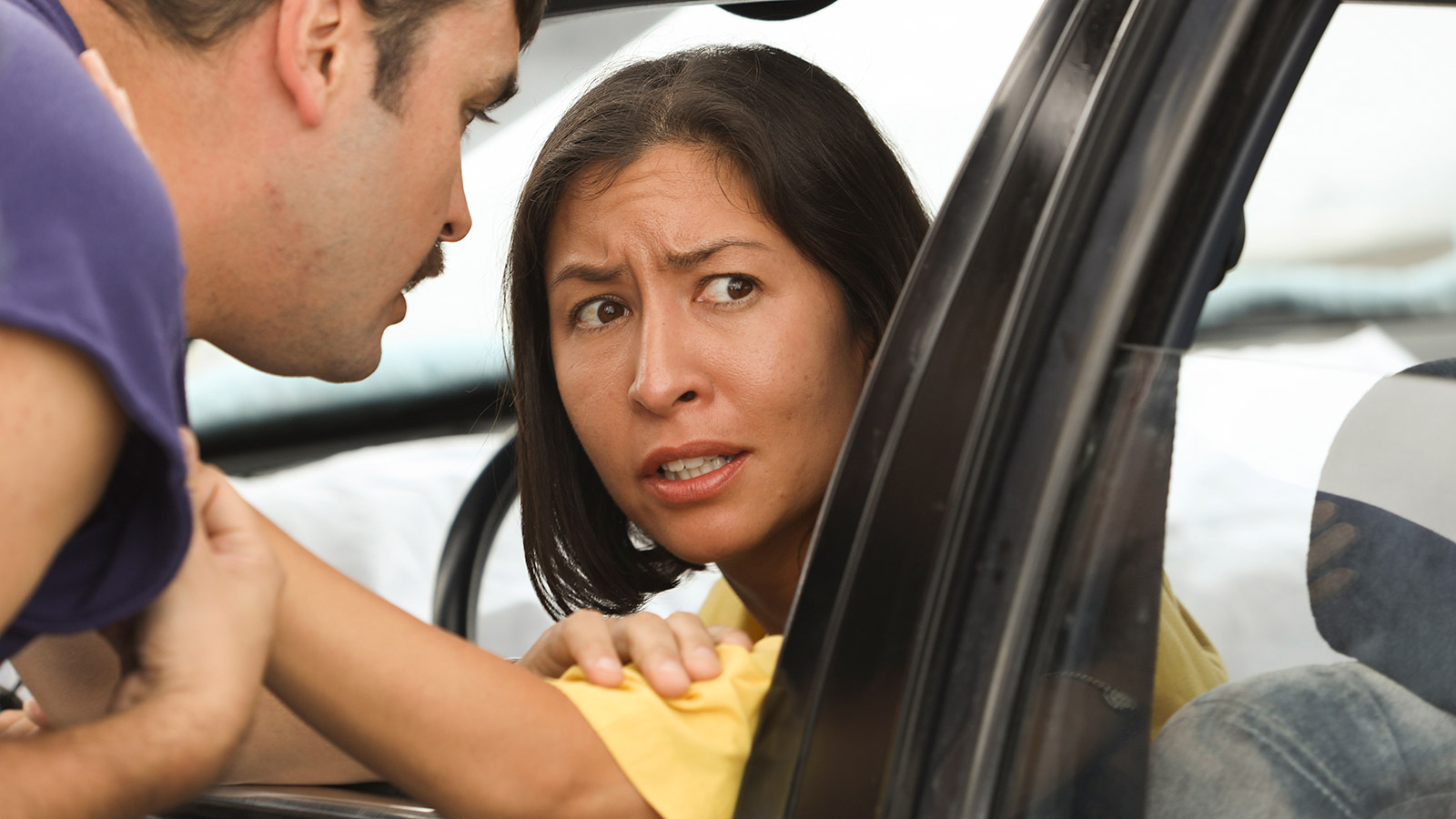 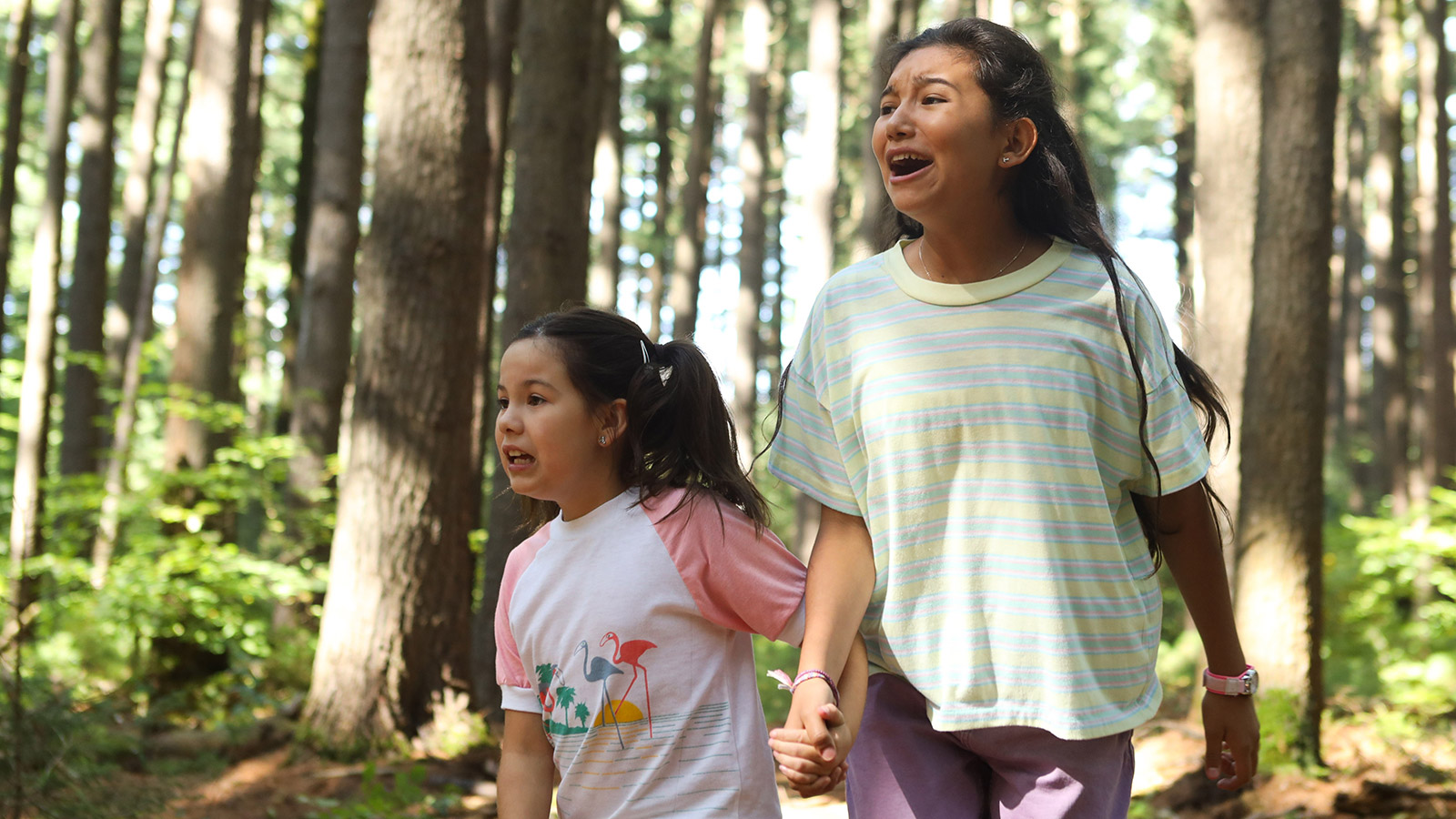 “Back when I was a child, I had this very shattering coming of age summer. I think one of the big descriptive words I would use to describe it is powerless. The difference in now making this film is that it’s the very opposite. I held the power and I was able to put out the story that I wanted to put out and I was in charge of how we tell that story.” – Director Tracey Deer, via The Gate

Initially, the Mohawks’ blockade of a road running through The Pines is an opportunity for electrifying camaraderie. Shots of kids roving around and collecting firewood give the protest an almost summer camp-ish feel. For Ruby (Violah Beauvai), Beans’ enthusiastic younger sister, even an armed stand-off between law enforcement and protesters feels like an action movie. “There are a lot of policemen. This is cool,” she exclaims.

Beans, for her part, tries to keep this sense of magic alive for her, even amidst mounting deprivation. When Ruby complains about having oatmeal for the umpteenth time, a consequence of grocery store closures, Beans inspires her to pretend she’s eating ice cream. Through such moments of levity, Beans captures the perennial resourcefulness of kids, especially in times of crisis. The actors have an easy, lived-in chemistry, and the tensions between wary parents and their curious children play out across their facial expressions.

But interactions with the outside world reveal the futility of playing nice. At a grocery store in the upscale southern part of Montreal, a clerk who knows the family abruptly tells them, “You’re gonna have to leave.” Beans’ mom leans on the counter, whispering, “Adam, please,” but he only adjusts his glasses. This moment is one of Beans’ first clues that the categories of friendly acquaintance, ally, and hostile stranger have begun to blur.

The film is also interspersed with news broadcasts from 1990 documenting such resentments. In one, a woman fumes, “We’re not allowed to eat because of Indians,” referencing the Mohawks’ blockade of the Mercier Bridge connecting Mohawk land with the southern part of the city. In another, a man proposes cutting off power to Mohawk homes. By elegantly weaving together its protagonist’s journey with archival footage, Beans powerfully evokes the destabilizing experience of finding strangers turned against you. 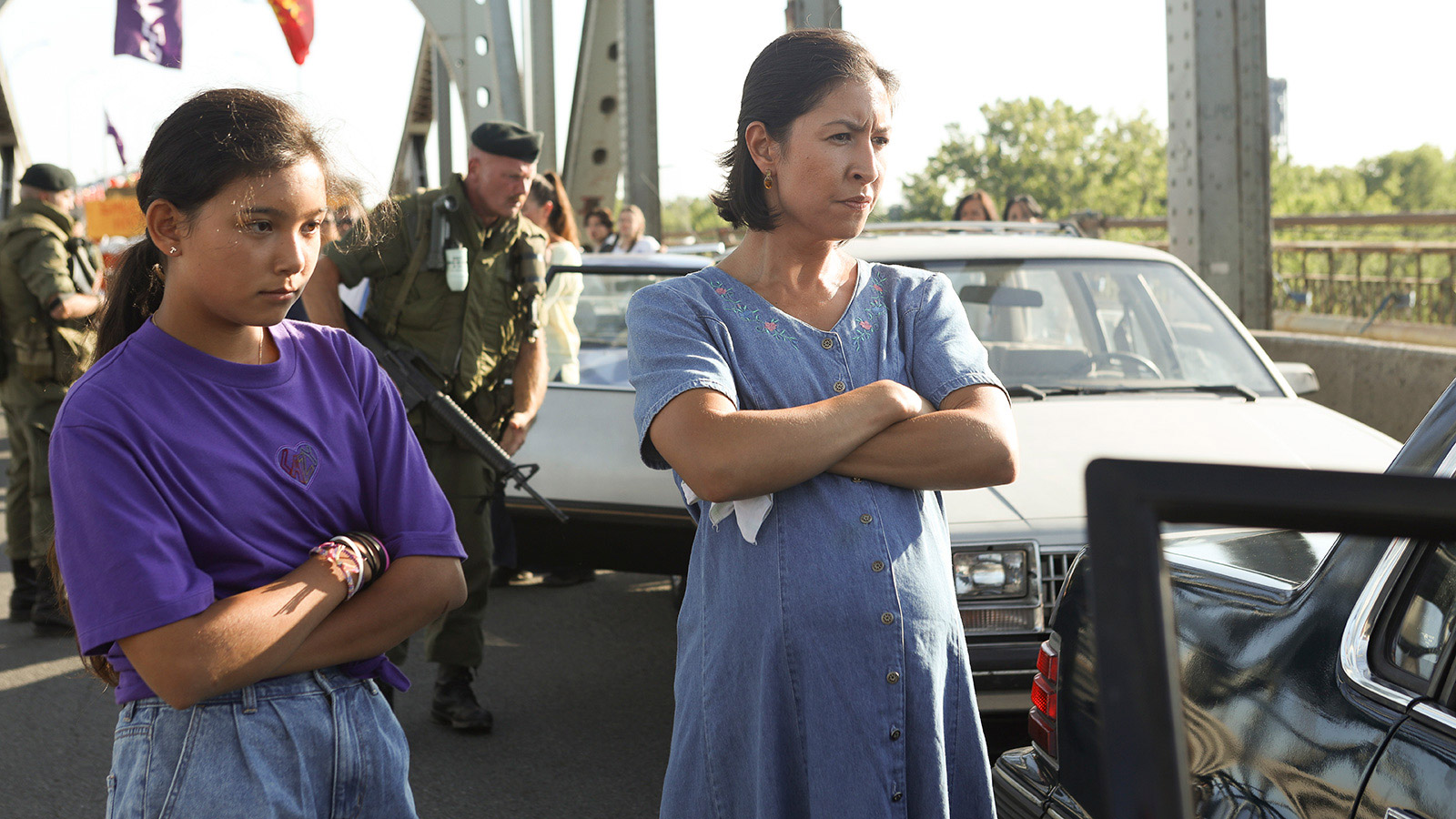 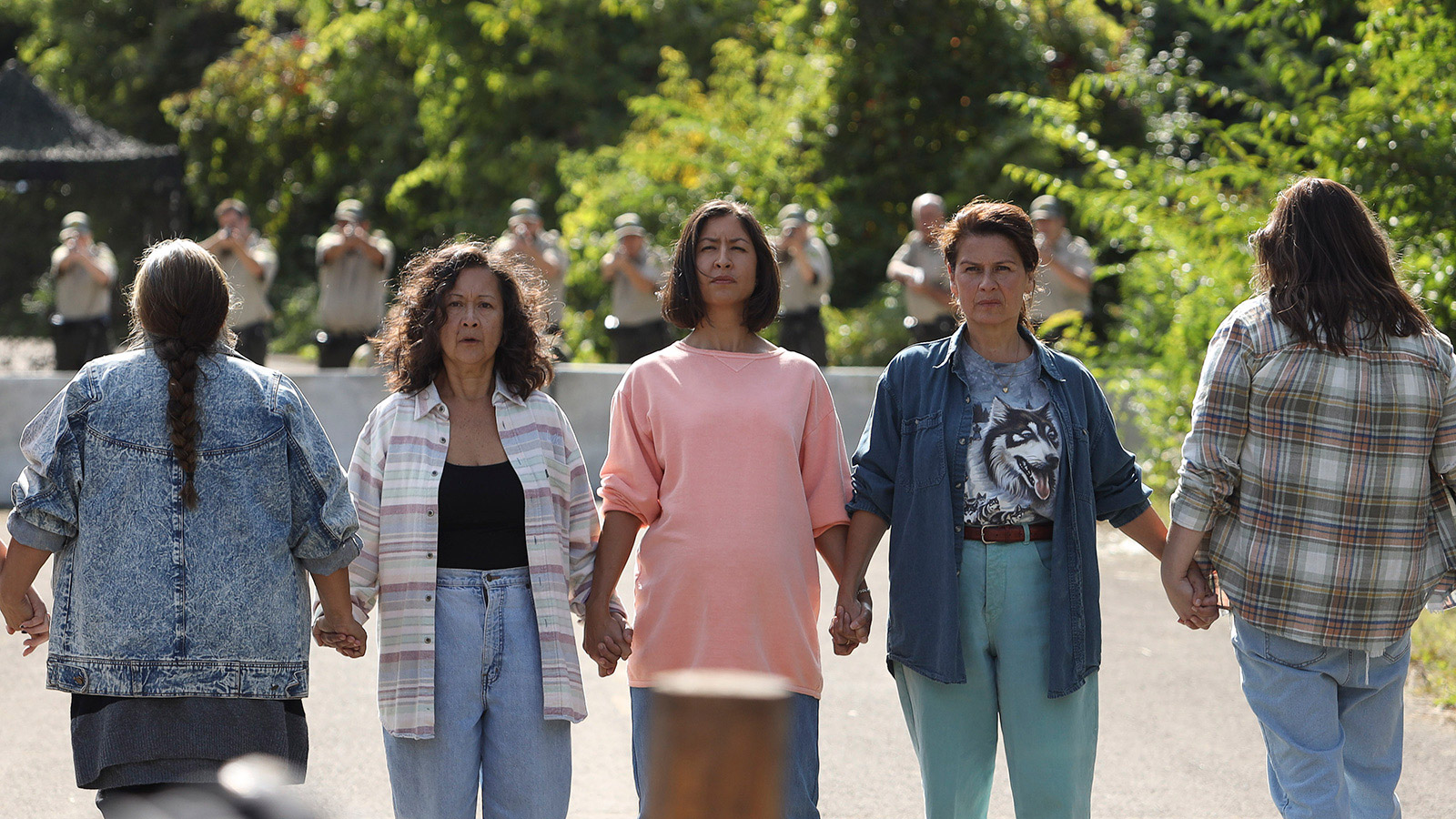 Having encountered first-hand how quickly grudging acceptance can curdle into outright prejudice, Beans abandons her identity as a rule-follower by falling in with an older, rougher crowd of kids. April (Paulina Alexis), the apparent leader who wears large hoop earrings and a permanent glare, oscillates between the roles of bully and mentor. In one pivotal scene, April takes Beans to a garage decked out with candles and rainbow twinkle lights. But instead of inviting her to a sleepover, April tests Beans’ mettle, even hitting her outstretched leg with a tree branch. “If you can’t feel pain, then no one can hurt you,” April advises. Yet as the abuses in April’s past gradually emerge, her determination to simply will away pain comes to seem heartbreakingly naive. Indeed, Beans humanizes the movie’s “mean girl” without forgetting how much those marks sting.

Amidst the unrest of stand-offs, weapons searches, and 24/7 news coverage, Beans is increasingly torn between obedience and self-destruction. Her parents implore her to run from danger while her new friends plunge headfirst into it, whether by throwing sparklers at cops or binge-drinking. Tarbell’s impressive physical performance illustrates these warring identities, as when she runs, smiling, towards her friends at a motel pool, then contorts her face into an insouciant blankness.

Having internalized April’s advice, Beans channels her in moments of danger. In one of Beans’ most dread-filled scenes, the family realizes that they’re driving towards a mob whose shouts grow more deafening each second. As jeering crowds hurl rocks at their car, police officers stand idly by. After they’ve escaped, Beans finds Ruby’s lucky painted rock alongside shards of glass in the back seat. “Why didn’t you help us? You’re supposed to protect people!” she yells at an officer, along with every bad word April taught her. This moment is clearly the culmination of a hundred small slights. Witnessing that symbol of Ruby’s tarnished innocence helps catalyze Beans’ political awareness.

Beans effectively mines the drama at the intersection of teenage angst and worldly liberation struggles while avoiding the trap of preachiness or edu-tainment. The kids of Beans are just as impulsive, impolite, and unruly as teens anywhere. Unlike other coming-of-age protagonists, they’re also reckoning with uncertainty over everything from their siblings’ safety to tomorrow’s dinner. Their community has been put under the harsh glare of surveillance and news coverage. Although no one is explaining competing land claims or the meaning of sovereignty to them, they still register the icy glares from strangers and the laughter of cops.

Yet Beans is also infused with moments of laughter, lightness, and solidarity. One striking scene early in the film cuts from a chaotic broadcast about a “tale of two barricades” to a wide-open shot of Ruby and Beans biking down an empty road, an expanse of clouds behind them. “This is our road!” Ruby yells. “Our road!” Beans echoes her.

Ultimately, Beans’ journey is one of claiming what she deserves, including the freedom to define who she wants to be.

Alison Smith is a recent graduate of The Bush School and is headed to Haverford College next year. At Bush, she was the editor-in-chief of the school paper, The Rambler, and also wrote many articles related to the arts, politics, and school affairs. She is also currently working on digitizing and analyzing the paper’s archives, which go back to the 1930’s. When she’s not writing arts criticism, she likes drinking black tea, watching coming-of-age movies, and hanging out at the greatest place in the world—Left Bank Books.