Alison Smith7 min read7 months ago1 comment
Los Angeles-based filmmaker and public speaker Ashley Eakin’s third short film, Single (2020), became a smash success when it premiered at South by Southwest. Single, which she’s now developing into a series for FX, follows Kim, a glamorous, self-assured freelancer with a limb difference, through a paradigm-shifting blind date. It’s an empowering, funny, and authentic portrayal of dating when one does not fit conventional beauty standards — but as Eakin explains, writing the film was a risk and even an act of faith. 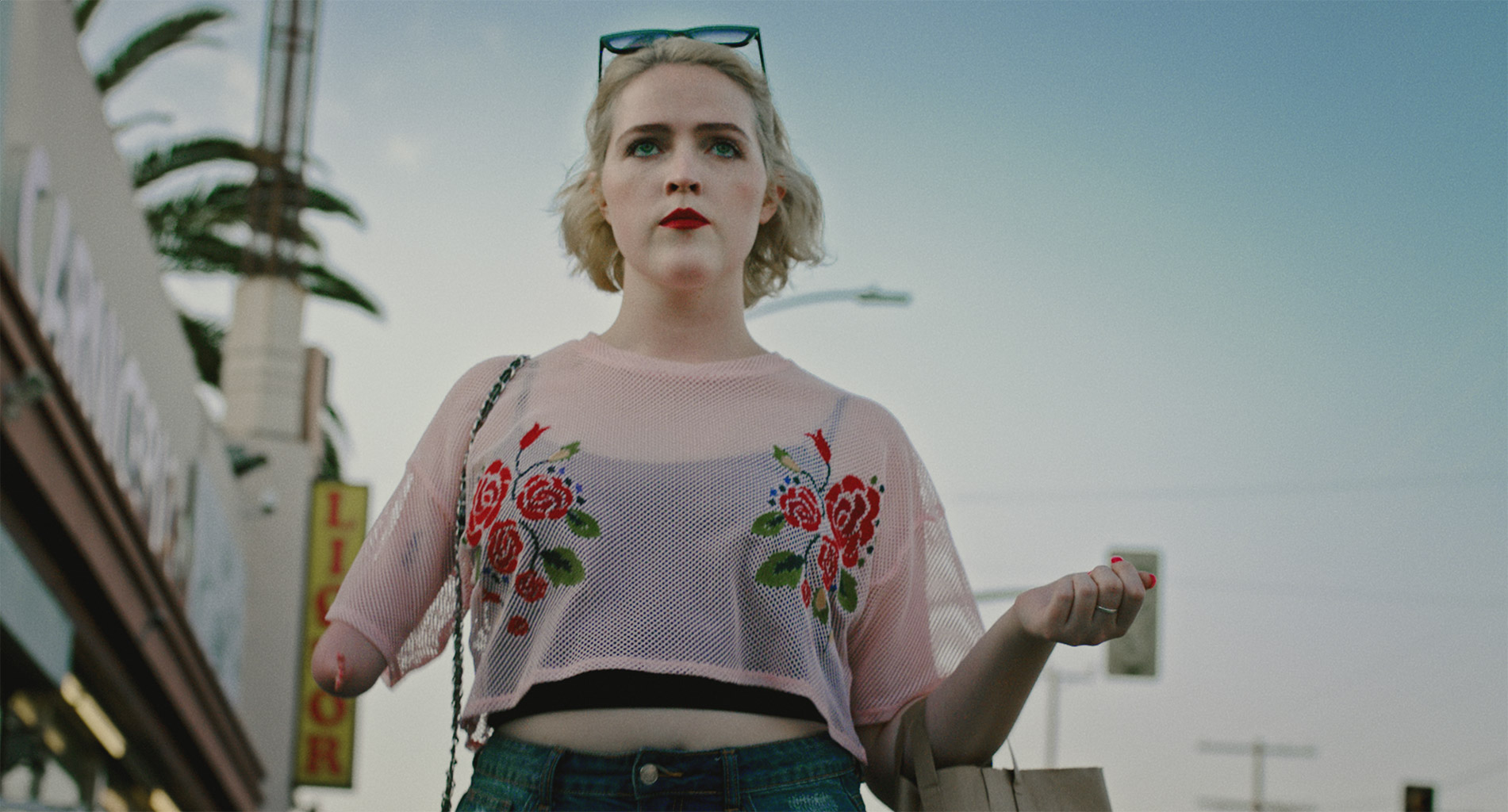 “I wrote Single in five days, and I was just the most honest I’ve ever been in anything I’ve written. It was terrifying,” she recalls. “I was like, I don’t know if people are gonna read this and think I’m a bad person.”
They won’t, because Single, which typifies Eakin’s approach, marries a stylish aesthetic and witty dialogue with nuanced explorations of disability, insecurity, and identities in flux. 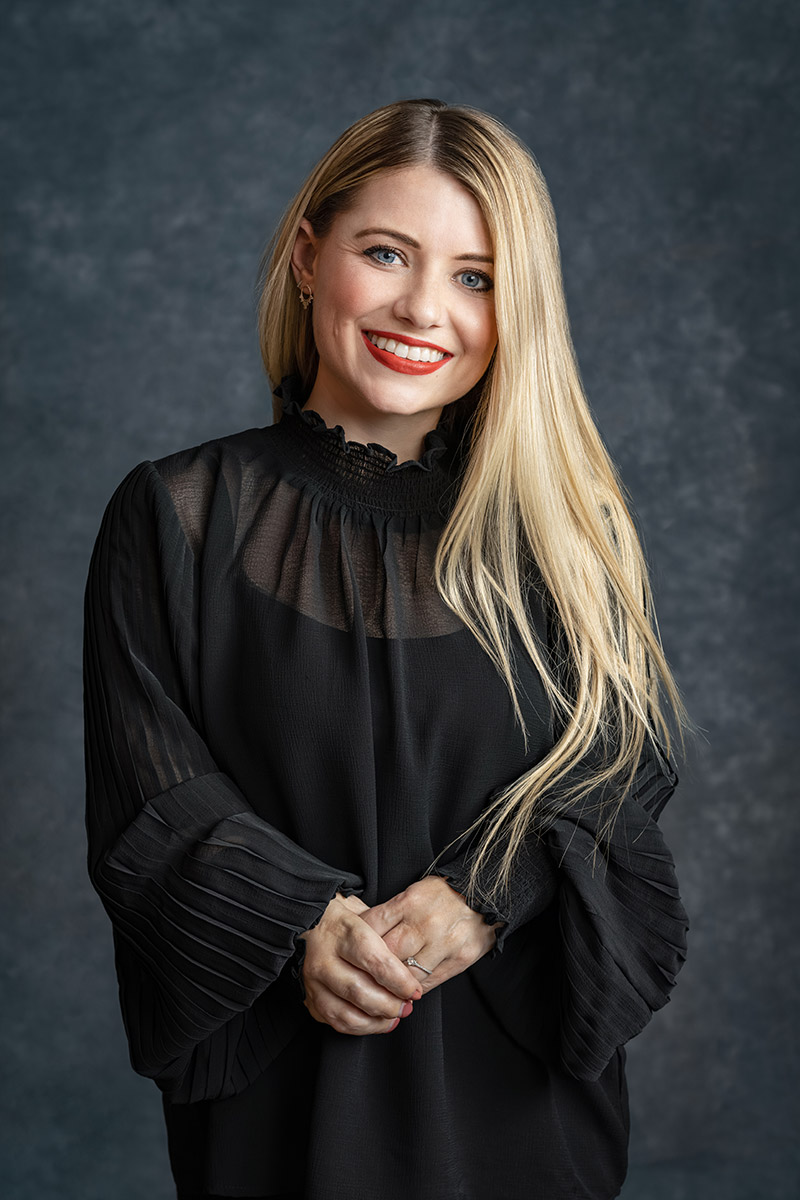 Since 2011, Eakin has worked as an assistant in Hollywood on projects such as Teen Mom (2011-2012) and America’s Next Top Model (2012-2013). Though this exposure sparked her curiosity about writing and directing, it wasn’t until years later that Eakin wrote and directed her first short, Exo (2015), a psychological thriller about a father-son relationship. Her next project was the poetic Blue (2019), which follows two high schoolers struggling with body image.

As Eakin explains, “I started having these inklings of: I think I want to direct. But I was born with a rare bone disease, and I’m smaller, I’m a woman, and at this time I didn’t see someone like myself directing. So it was really scary to put out there that I wanted to do it.”

After the release of her first two shorts, Eakin landed a gig as assistant to director Jon M. Chu on the set of Crazy Rich Asians (2018). It was a transformative experience that encouraged her to focus on her own craft.

“I was going through this identity revolution, working on [Crazy Rich Asians] and learning about what it did for the Asian-American community, and Asian community in general, to feel seen,” Eakin says. “It made me look at my own life.”

Her next career breakthrough was a 2017 SoulPancake talk, which unpacks internalized shame over her disability and has since amassed 50 million-plus views on Facebook. Social media played a complicated role in this path to self-acceptance, at times exacerbating Eakin’s insecurities while also connecting her to a wider disabled community.

Embracing the Vastness of Disability

In her films, Eakin excels at deconstructing the mainstream lexicon for disability without ever verging into academic territory. Eakin’s latest short, Roommates (2021), centers on two college freshmen with physical disabilities who become friends and attend a wild party together, over the course of move-in day. Izzy, who herself has a prosthetic leg, inadvertently offends her new roommate Sophia almost as soon as they meet. “Well this is dope, I’ve never had a friend that’s wheelchair-bound before,” she says, but Sophia corrects her.

But the perceived offense isn’t the end of the interaction. What really changes the tenor in the room is Izzy’s three simple words: “Wanna get drunk?”

Over mood lighting and vodka shots, they trade guilty confessions. When Izzy admits to checking the “disabled” box on forms without believing the term fits her, Sophia exclaims, “I get it, I also used to hate the word. But then I realized . . . I can’t walk, so what? It’s the inaccessible world that sucks dick.” 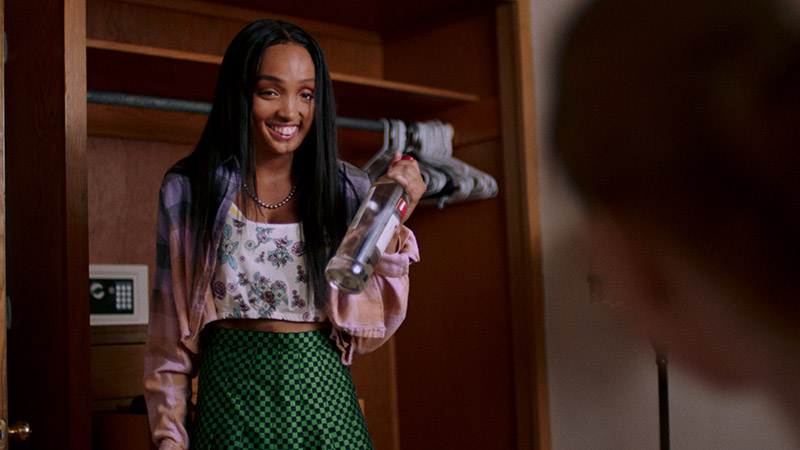 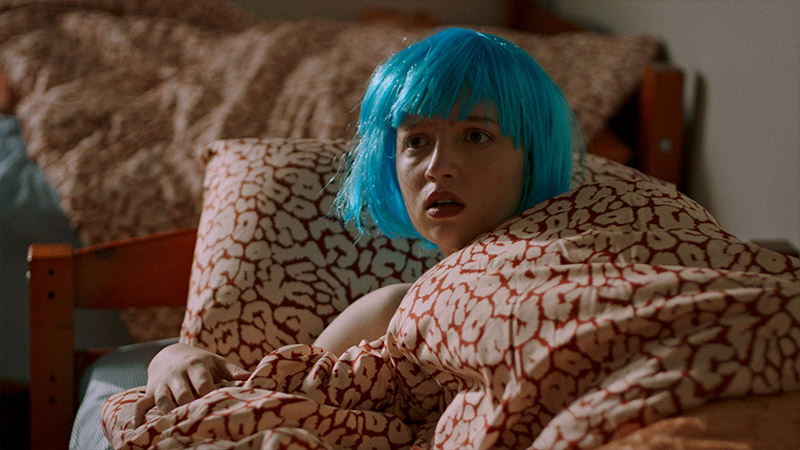 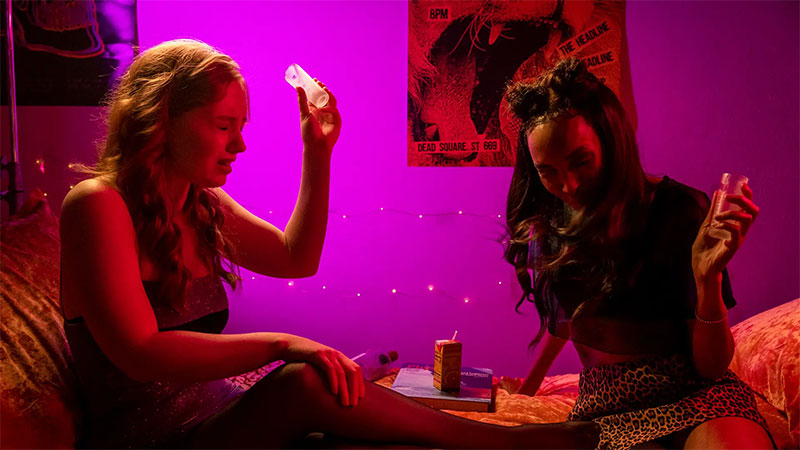 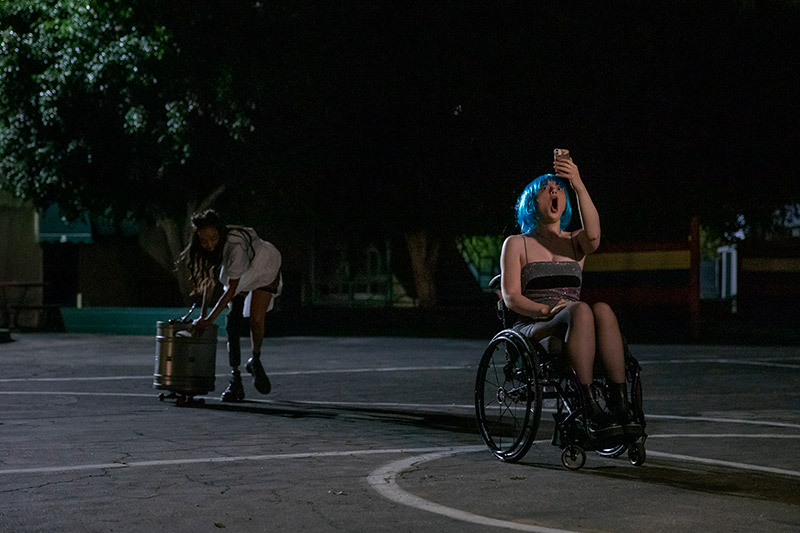 This fraught exchange from Roommates pulls from Eakin’s own ruminations. “Even some people with disabilities have been like, ‘[But] that means unable,’ but then my husband and I had this philosophical discussion of, ‘Why is being unable to do something inherently bad?’” Eakin inquires.

“We are born into this world worthy; everyone sees a baby and they do nothing and you’re like, ‘It’s worthy,’” Eakin continues. “I just reframed how I thought about everything, and for once in my life I’m finally proud of being disabled. If you question, ‘Why are we saying it that way?,’ — like wheelchair-bound — it’s thinking about it in a different way. Even I’m still learning all the new language.”

Via Sophia and Izzy’s clashes, Roommates skewers the absurdity of classifying disabled people as a monolith. In Single, this realization is particularly explosive. Kim, the main protagonist, registers that Jake, an unexpected blind date, is missing one hand and calculates that her family friend assumed she ought to date someone like her.

“You don’t think that this is fucked up?” she interrogates.

Later, in one of Single’s punchiest scenes, an impeccably choreographed verbal ping-pong match, she fires a lightning round of icebreakers, contradicting his answers at every turn. Only later do her defenses come down around these differences.

As Eakin illuminates, “The definition of disability is so vast, and that’s what I’m always trying to show — that there can be a sassy badass character like the girl in Single, or there can be a girl who loves to drink vodka and smoke weed. There can be someone who’s kind of salty and thinks they know all the terms. I just like showing all these different types of people.” 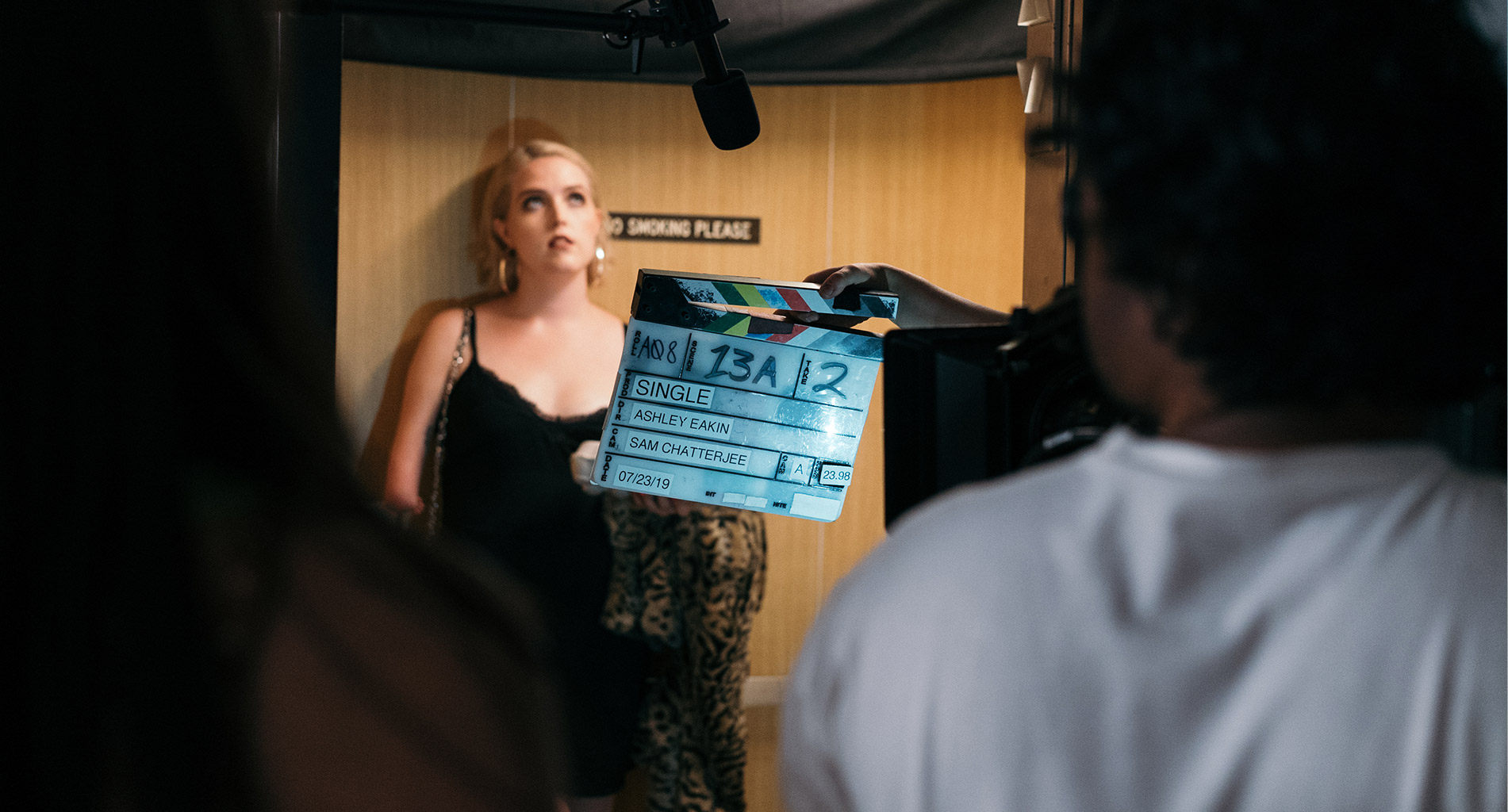 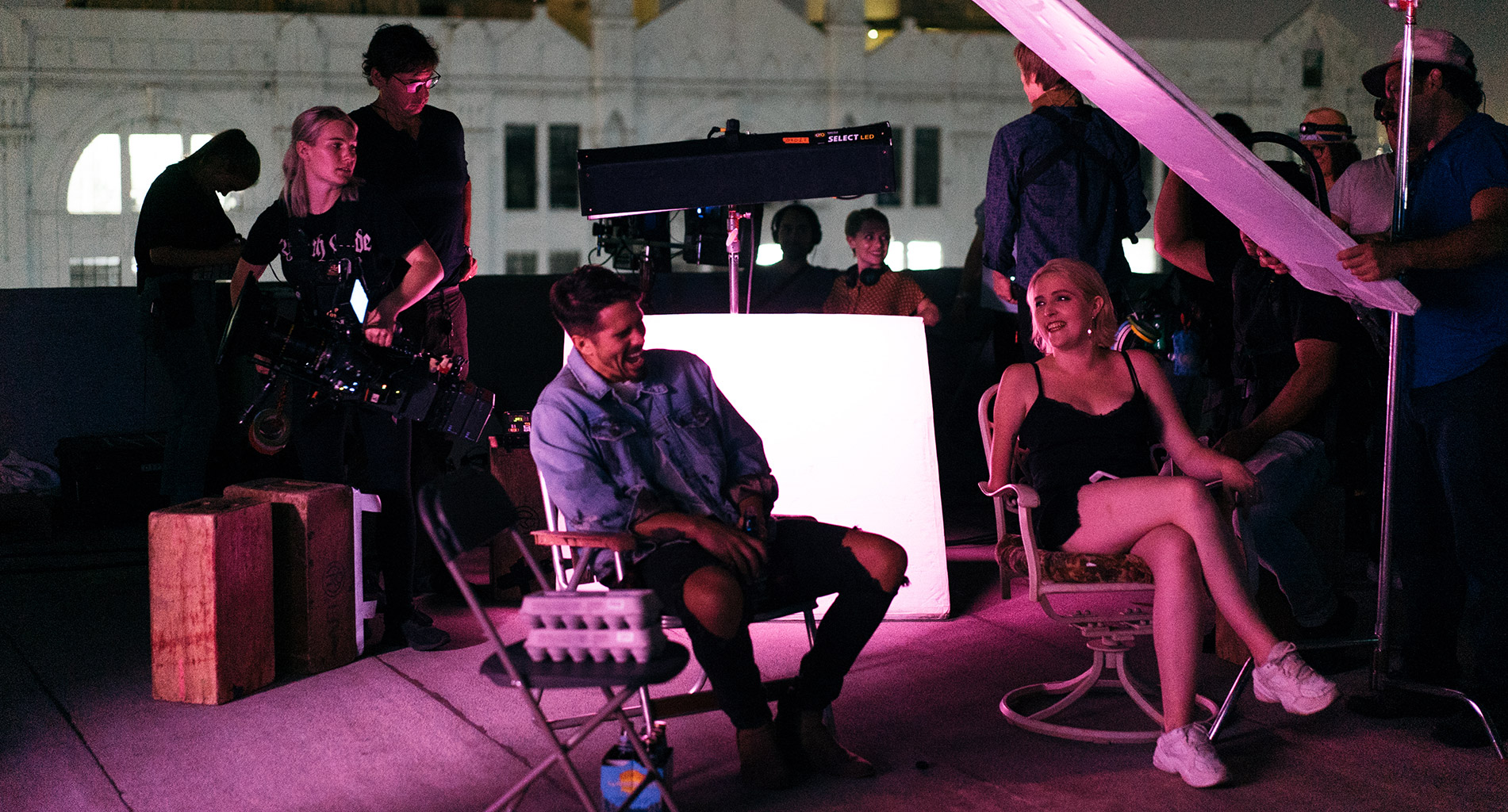 Throwing an Egg at Ableism

Cinema is a kind of play-space for Eakin — a license to break the veil between polite facades and tumultuous interiors. Such is exemplified in a scene in Single, when Kim throws an egg at a woman who gives her a condescending compliment.

“You feel so much angst sometimes, and you get these microaggressions all day and you’re calm, and just pass it over,” she explains. “[That scene] was almost a cathartic moment for myself, because my entire life I’ve been told, ‘You have such a pretty face.’ Before I realized what they were actually saying, I don’t think I took it as as offensive as it actually is.”

“I think that moment was me throwing an egg at every single person who’s ever said it to me,” Eakin adds.

Indeed, the sharp editing, punchy music, and rousing performances of Eakin’s films leave the viewer wanting to throw an egg at ableism in the real world. Yet in quieter moments, her characters grapple with their failure to live up to an imagined progressive, pro-disability ideal. Eakin’s work is threaded through with those messy parts of disabled people’s lives, including internalized ableism. She’s wary of calls for representation that involve eliding real struggle.

“There’s people who are like, ‘Man I want to see a film where the disability isn’t even brought up,’ and yeah that’s who I used to be when I was ignoring it, but it was still a part of my everyday life,” says Eakin. “When I go to the grocery store it’s a different experience than when my husband goes to the grocery store.”

Eakin’s work manages the tricky balance of evoking the grind of daily ableism and tokenism without ever essentializing her characters as victims. Just as in her SoulPancake talk, she injects honesty into a sphere of discourse more often characterized by platitudes and euphemisms.

“Right now, I feel like there’s not enough stuff exploring: what does it mean, living this life in college but also having to go to really intense doctor’s appointments?” she questions. “It’s such a complicated, heavy thing, and there’s all these things you can explore, but first normalizing that these people can exist in these spaces is really important. I existed in college, I went to all the parties and did all the things.”

Reflecting on the tangible power of representation, Eakin adds, “If I would’ve seen something that showed me that before I went, I probably wouldn’t have been as scared.”

[…] I started with a journalism major at San Diego State and by the time I graduated I realized I wanted to work in film. So I transitioned and started PA-ing in the industry. You can find the whole trajectory here – https://redefinemag.net/2022/ashley-eakin-writer-director-interview-films-deconstruct-disability/ […]