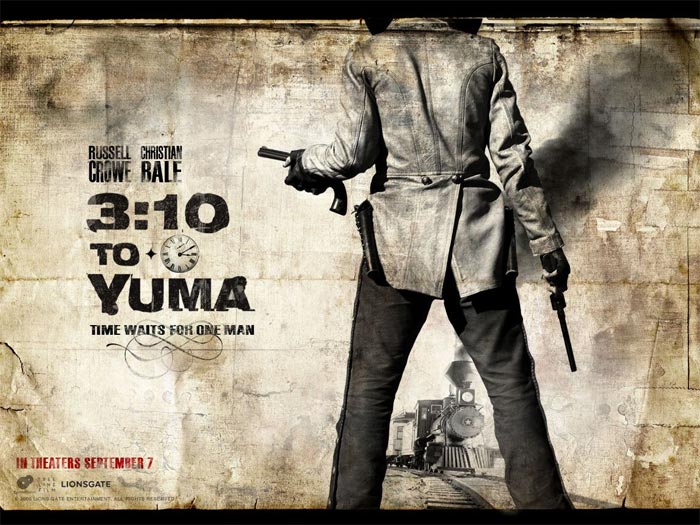 “3:10 to Yuma,” a remake of the 1957 film of the same name, is the first of a few western themed movies to hit screens this fall. Its premise is simple: Christian Bale, playing downtrodden war veteran turned rancher Dan Evans, volunteers to help escort the devious outlaw Ben Wade, played by Russell Crowe. The group’s task is to get Crowe to the train departing for Yuma prison, where he is to be tried and punished for his crimes of robbery and murder. The train station isn’t far, but Crowe’s loyal thugs are determined to save their leader at any cost.

The film is a western geek’s dream, a whirling dervish of shoot-outs and stare-downs, filmed in the mustiest of locales, featuring two actors that would top anyone’s “most fitting for a Western” list. Crowe and Bale are a pleasure to watch, their interplay is spot on as they grunt and growl through every line like it’s never been done before. No one alive could play Ben Wade better than Crowe, whose mad dog visage and cunning grimace imply a devious intellect much more dangerous than any pistol. Christian Bale is equally flawless, with every cold gaze harboring a sense of deep desperation, one that has been smothered for far too long. Director James Mangold, whose resume includes Copland (yay!) and Walk the Line (boo!), is obviously also a big fan of the genre, giving in fully to all the indulgences associated with this era in film. Because of all this, including an exceptional Ben Foster as Crowe’s second-in-command, “3:10 to Yuma” feels more like a labor of love than anything.

And it’s this love that makes it easy to forgive the films numerous shortcomings. The story, never solid to begin with (the original short story was drafted out on a bar napkin), is full of large holes, making it difficult to suspend disbelief at times. The mercenary band’s holding of the legendary outlaw Ben Wade amounts to no more than a set of cuffs, which Mr. Crowe exploits again and again to agitate, harass and attack his captors. You’d think after he brutally kills one of them, the rest of them would wizen up and perhaps tie his arms behind his back or something. But no! He’s allowed to twiddle his thumbs and think of a new way to deal with his unwelcome escorts.

A more problematic issue in “3:10” is how it handles the central idea of the film. “3:10 to Yuma,” both the original and the remake, is lauded for its interesting character study of the archetypical hero and villain. Through the dialogue between Evans and Wade, the motivations of heroes and villains are both brought into question, as the protagonist is to the brink time and time again by Ben Wade’s incessant needling. However, this thread isn’t brought to a satisfying conclusion, rather it develops awkwardly, with Bale and Crowe shuffling their feet as they move back and forth (verbally at least) from good to evil. Ben Wade’s motivation is particularly difficult to understand, but it does make for a classy ending.

“3:10 to Yuma” is what “the Twilight Samurai” is to samurai films or what “Death Proof” is to the B-movie sex kitten vehicular homicide romp. Mangold delivers an excellent homage to an underappreciated genre (it’s not all about misogynistic cockfighting). Westerns are the purest of American mythos, where the dream of prosperity, freedom, and a better life is pitted against the harsh realities of the unforgiving world. Men are boiled down to their purest elements, foregoing trivialities like pomp and circumstance to create characters that, even with their larger than life personalities, feel like the every-man. And even if Westerns aren’t your thing, its worth it just to see these two leading men (especially Russell Crowe) turn in their best performances in a long while.