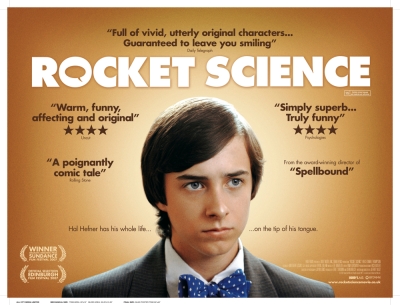 Hal Hefner, our teenage hero in Rocket Science, is the stuttering kid. He stammers through simple sentences. He looks at his feet while he talks to people. He sits in the back of class, fearful that his voice might accidentally escape and run away. And for the last odd-decade or so, that’s all he’s been. Other than being a quiet underachiever with a speech impediment, he’s a blank slate. It’s through the intervention of an overachieving, fast-talking, and, most importantly, female classmate that Hal attempts to break out of his shell.

Ginny Ryerson, an all-star on the debate team and stone-cold ice-queen, bewitches the spineless Hal into joining the debate team to avenge her embarrassing loss at last year’s state competition. At first the idea of public speaking for fun is completely ridiculous to Hal, but thanks to some additional prodding from Ginny and his own restless hormones, Hal decides to give it a shot. But this isn’t a Disney find-your-hidden-talent feel-good story; Hal is a complete failure when it comes to speaking. His teammates can barely watch as Hal struggles with the opening comments to his arguments. Eventually he is completely abandoned, by his friends, family and by Ginny. Hal is then forced to make a choice: to give it all up and regress back into the bit player he once was, or to become something more, something unexpected.

Reece Thompson’s standout performance as Hal alone makes Rocket Science worth watching. Whereas other teen coming of age comedies are typically dominated by a veteran actor as a side character (think Vince Vaughn in Thumbsucker), Hal truly outshines the rest of the cast. His portrayal of the fumbling, socially awkward teen filled with equal parts anxiety and frustration is charming and honest.

Unfortunately, like many quirky indie comedies, Rocket Science relies on some shallow caricatures to fill space. Comedy it-guy Jonah Hill makes an unexpected appearance as a library patron and an amateur philosopher, but that’s all it is, an appearance. He rattles off a couple lines then fades into the background. Ginny’s neighbors play Violent Femmes covers to cope with marital stress. Is this important to the film? No. Is it absurd? Sure. But it’s also a tired trend (it was tired when it got here) that seems to be cropping up more and more in comedies such as this. From the kid who writes death threats on his notebook to his off-kilter Asian neighbor (see next paragraph), there are dozens of ultimately throw-away characters taking up space in this movie. It’s a cheap way to get laughs, and smacks of laziness.

Just a side note: Wow, Hollywood. You put another Asian freak in a movie full of white people. I don’t understand what the writers were thinking when they made this comedic sidekick oriental. Seriously, what the fuck is a Korean kid with a comically exaggerated bowl haircut doing in this movie? Is this the kind of shit that gets laughs these days? Why not get Mickey Rooney to do a guest appearance in yellowface and have him exclaim “mee rikey verry maach”? I’m not saying every movie should be Better Luck Tomorrow (because that movie sucked), but seriously, if you’re going to put Asian people in your movies, at least try to hide your incredible bigotry a little. This is some railroad builder/“flied lice” level shit. Makes me sick. And I don’t care if you throw him a bone by making him good friend of Hal. It’s still a ridiculous caricature and it needs to stop.

At the very least we have good old Hal to rely on. Rocket Science isn’t a profound coming-of-age tale. It’s simply an excellently developed character surrounded by some not so developed sidekicks and situations. Reece Thompson saves this movie, giving us a protagonist that we can’t help but root for, no matter how slim his odds are.