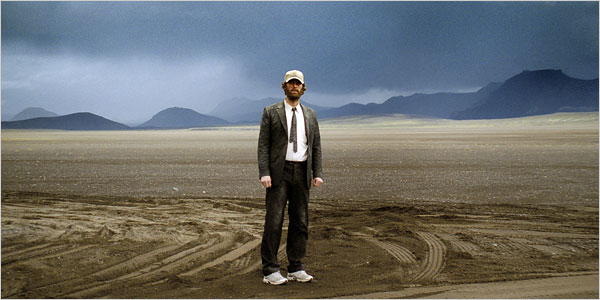 The reason the synopsis for The Bothersome Man sounds ambiguous is because the film is. A Norweigan surrealist flick directed by Jens Lien and written by Per Schreiner, The Bothersome Man has won 8 awards at film festivals around the world, as well as been nominated for two others. I can legitimately say I think it deserves it, as it was one of the best films I saw at the Seattle International Film Festival this year.

The movie starts off with the main character, Andreas, in a desolate area in the middle of nowhere. He is picked up by a car and transported to a city, where he is immediately and abruptly given a job and an apartment without much explanation. He does not seem to question it.

On his first day of work, Andreas sees a suicide victim who is impaled on a metal spiked fence outside of his office building. The next day, he meets the same individual, healthy and unscathed. Similarly, Andreas slices off his finger in the copy machine and finds that no one is alarmed, despite his cries. His finger regenerates the next day.

Many things can be said about this movie, but the more I say, the less the movie’s impact will have on you, the viewer. Thus, I will stray away from other concrete examples.

The film is one of mental horror, when an individual with free thought is placed into a world which lacks it. Andreas struggles with this throughout the movie, and seeks to find a way to end his unhappiness. Numerous suicide attempts do not help, so he resorts to more drastic measures. Lien does a great job of using drab colored and prolonged shots to convey the feeling of monotony.

The Bothersome Man is not for those who do not like movies that are relatively slow-paced and minimalistic. It is also not for people who like movies that necessarily linearly connect the dots realistically, because it doesn’t.

For individuals who enjoy human interactions, The Bothersome Man is a good fit; the film does not pay much attention to the larger picture. The focus here is on the exacting life of Andreas and his associations with others. The film shifts between the highly plausible and the highly implausible at the drop of a hat.

One of the film’s greatest strengths is that individuals can wholeheartedly disagree about the film’s meaning, yet respect each other’s opinions on it because the possible conclusion is so open to interpretation. It is possible that The Bothersome Man strikes amazing parallels with our current life on Earth. It is also possible that the film symbolizes the afterlife. Beneath the black comedy exterior, the film speaks to a deeper message that may be amazing to some, but absolutely lost on others.