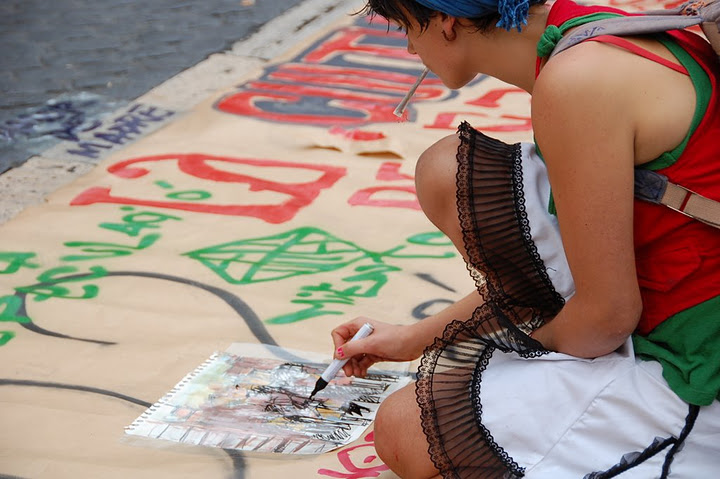 A week and a half ago, I was in Barcelona and stumbled a protest that seemed well-organized and was immediately engaging. With my limited Spanish, I managed to pick up slogans like, “Beauty is not for sale,” and “Barcelona is dead.” It became immediately obvious that the protest was politically and artfully-motivated.

From an outside perspective, those statements seem extreme, especially considering Barcelona is known for its street art. Street art radiates practically from every corner of the city, and I’m not just talking meaningless little tags here and there. Barcelona is a storehouse of graffiti and street art pieces that actually look as though they took time, passion, commitment, and energy. What then, caused this outpouring of anger from the art community of Barcelona?

Not many people in Spain speak English that well, so after an hour of standing around wondering, I finally decided to try my luck and ask around. In Spanish, I was told something along the lines of this. The protest stemmed from police actions that resulted in the closing of art spaces in a nearby neighborhood. The closed spaces were important hubs for musicians and artists alike, and as a result, the artistic community felt patronized and felt that bureaucratic decisions involving their livelihoods were being made without their input.

People of all ages participated in the peaceful protest, which was artistic in and of itself. A giant banner was unfurled on which visitors were allowed to scrawl their opinions. A booth tacked with, “Take off your pants!” encouraged visitors to defy the norm and take Polaroids of themselves naked.

It is only in a city like Barcelona with such a lively street art scene that such a demonstration can happen. While I cannot fully grasp the ramifications of all this bureaucracy on the Barcelona art community, I sincerely hope that it emerges from this better than before.

thanks for the report, I’m one from cultura de base in Barcelona, we got this report on our group list and all of as can see it now.
I’m running the independent theatre L’Antic Tetare, space for investigation, research and programming scenic art and it’s rehearsal and residencies place call AdriAntic.
See you