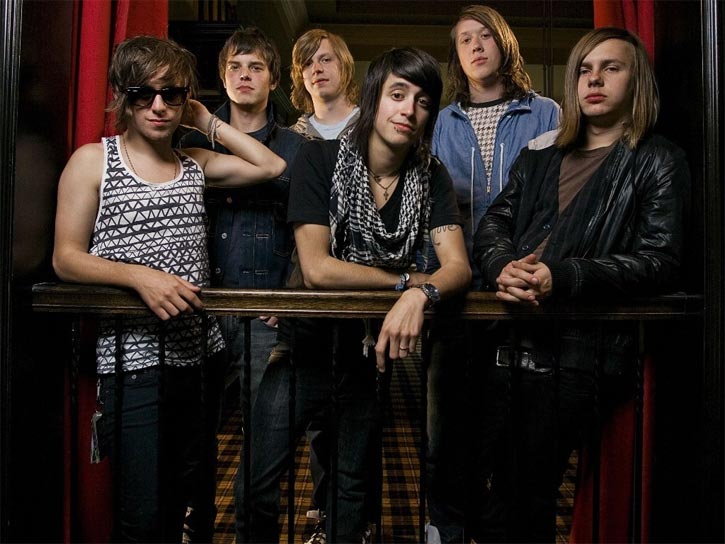 “There are good times and bad times, and we write about both.” — Andrew de Torres

Danger Radio vocalist Andrew de Torres and guitarists Elan Wright and Andy Brookins shiver outside the Highline Ballroom in downtown New York City, answering questions and thanking fans that come up to congratulate them on an amazing show. The band engages in small talk with Taking Back Sunday frontman Adam Lazarra, already outside the venue, telling him that they’re getting ready to do an interview. When asked if he’d like to join the Q&A session, Lazarra politely declines. “I suck at interviews,” he laughs. The boys are shooed away from the Highland’s front entrance, and once they’re tucked away at the entrance of the store next door, they’re ready to get down to business in the rain and slush. “[The PacSun Tour] has been absolutely friggin’ amazing. This tour is just so much better than I could have ever expected,” de Torres says, shaking his head in earnest. With the tour coming to an end, the members look back on the experience. “When we first got the offer, we were like, ‘The PacSun Tour…?'” de Torres says, making a skeptical face. “None of us really shopped there… but we’ve had a blast.”

Wright interjects with a laugh, “Since being on this tour, I’ve actually gone to the PacSun store and found shit that I liked. I bought a pair of sweet Nikes and I rock a jacket that’s from there all the time.”

Danger Radio has been playing alongside punk rock’s new superstars Envy on the Coast, as well as The Audition and Another Day Late.

If the boys ever fret over a possible broken string or bad sound check, it doesn’t register in their performance. The band, which also includes bassist Marvin Kunkel, drummer/programmer Nico Hartikainen and keyboardist Spencer Phillips, ambushes the stage after Another Day Late with upbeat power that almost startles the usual punk rock show junkie. De Torres urges the crowd to put up their hands and dance, while the band plays most of the songs off their EP, Punch Your Lights Out. The members’ presences during the show perfectly align with the dynamic nature of the songs performed in their set. Sudden tempo changes and reggae and disco-inspired licks, along with de Torres youthful voice, put the pieces together in the band’s dance-your-pants-off puzzle.

If you’re a Danger Radio newbie, though, you may only see the band’s stage presence and upbeat instrumentals. “The things we write about are actually semi-depressing,” Wright admits. Adds de Torres, “I wouldn’t say the lyrics are as depressing as they are… like, I have spiteful things to write about. There are good times and bad times, and we write about both.”