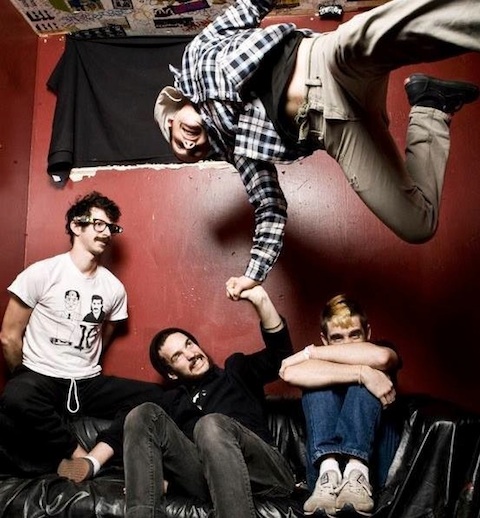 drmanhattan seems to be a perfect blend of humor, wit, and dirty cynicism. “I think about humanity and where it’s headed. It’s headed where it’s always been heading — downhill,” says Dr. Manhattan bassist, Adam Engers. He doesn’t seem the least bit shy about speaking his mind as he describes relevant themes in the band’s new self-titled album.

Joining forces with producer Jonathan Alvin, Engers, along with his brother Matt Engers (vocalist/guitarist), Nick Vombrack (drummer), and Andrew Morrison (keyboardist), have pieced together 11 tracks of schizophrenic emotion and sound. The music walks an uncommon line between electro, indie rock, and punk rock.

Unlike most genre-benders, however, Dr. Manhattan sticks vindictive lyrics to the realization that humanity sports a collective pessimistic outlook on life. “Hypocrisy can’t subside/ One trained thought fled just despite/ Towns filled with skeptic still light/ Disease and care left from sight,” gripe Dr. Manhattan in their first album single, “Big Chomper, Big Chomper.” The muffled, echoed vocals that are ever-present on the album contribute by giving the recording a live-quality feel.

The album reflects the dynamic nature of the band, and the band’s overall mentality of just not giving a damn shines through. They whole-heartedly urge the experience of life to the fullest. At times, Dr. Manhattan’s lyrics feel like a call for a revolution of sorts, in a serious yet humorously pessimistic way. They seem to be a perfect blend of humor, wit, and dirty cynicism, with their humorous antics noticeable even on their MySpace page, where they refer to t-shirts as “chest protectors” and liken purchasing music on iTunes to purchasing music for “your computer’s ears”. Everything is tongue-in-cheek. The band’s live show also demonstrates the members’ carefree attitudes about what they do and the music they produce.

Dr. Manhattan recently showed off their eccentric ways at The Bamboozle 2008 in East Rutherford, NJ. Performing on the Aquarian Stage, the band didn’t get to show their stuff on the main stages, but as Engers says, the experience was, “amazing… [the] most fun days of our lives.”

The band performed a lot of songs off their new album, including “Big Chomper, Big Chomper,” “Gunpowder: A Ballet,” and “Tracey’s Buns.” To top off their performance and to almost further promote their laid-back attitudes, Dr. Manhattan covered Andrew W.K.’s infamous “Party Hard,” with Washington foursome, Schoolyard Heroes.

All the hard work during The Bamboozle paid off, though. The band snagged one of the spots on Rolling Stone’s “Bamboozle 2008: Five Bands That Broke Out.” Along with Tyga, The Cab, All Time Low, and Mayday Parade, the members of Dr. Manhattan were singled out for the esteemed label of “breakout artist.”

“That completely knocked me out of my reality… to be chosen out of 100 bands to be put out like that,” Engers humbly admits. “We were just doing our own thing and being ourselves.”

The guys don’t plan on stopping and basking in their success for long, though. Next on their itinerary is punk rock’s legendary festival, Warped Tour. “We don’t even know what we’re driving,” Engers says of their plans for Warped Tour. The band will be playing the Hurley Stage for the second leg of the tour, from July 23 to August 17. It will be their first time back in a few years. Their last experience at Warped Tour, Dr. Manhattan played on the Ernie Ball Stage in Chicago for what turned out to be a battle of the bands. They ended up winning the competition and scoring all their current equipment for free.

But summer doesn’t mark the end of the band’s adventures, either. After performing for one of music’s biggest festivals, the humble Engers & Co. will play a wedding in September.

“We’re kind of acquaintances with the guy,” says Engers about the groom, who roomed with the band’s merch guy in college. As a band, Dr. Manhattan seems to have no qualms about trying new things and will give even an acquaintance’s wedding their best shot. They’ll even be learning some Motown and Beatles tracks specifically for the wedding.

As the band steadily reels in fans with their chaotic live performances and charmingly relaxed approach to their art, it’s clear to see that Dr. Manhattan are well on their way to developing a very dedicated and hardcore fanbase.

To fans and future listeners, Engers has only one thing to say: “Don’t forget your Ovaltine.”