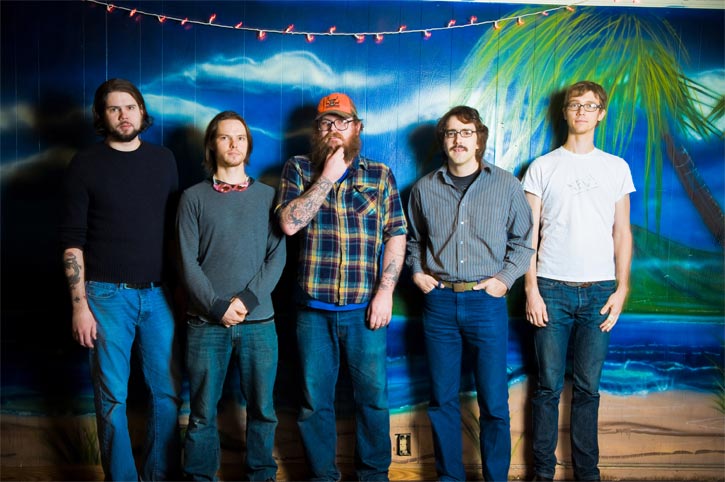 “A Northwest album has Vitamin E deficiency… it’s natural music; there is no style.” — Jim Cotton

Second to the Last Frontier, the new album from the Feral Children, is like twelve months lost at sea. Depending on your sense of adventure, it’s either harrowing or awesome. Like work by their contemporaries, Animal Collective, it blows the parts of your mind that are numbed by listening to the same old things. Frontier is a mature step up from the band’s EP, Eternity Emergency. The songs are richer and wilder, yet more consistent in their quality. The album opens with “Spy/Glass House”, which, upon casual listen, can be mistaken for “They’re Gonna Kill Me,” the first track on their 2006 EP. When the two are put side by side, however, one realizes that the band has matured their sound. The resulting tracks have stronger vocals, more energetic drumming, more confident guitar tracks, and better piano integration.

“We discovered what wasn’t good and we stopped doing it,” says classically-trained pianist Sergey Posrednikov, on the process of getting from Eternity Emergency to Frontier. The band and I are sitting at the Redwood, a dive on the edge of Seattle’s Capitol Hill, where bassist/vocalist Jim Cotton works as a bartender.

The Feral Children all agree that they saw “where we were and it didn’t sound like where we wanted to go. Those songs were done — almost stagnant.”

Keenan explains, “The process for Eternity Emergency was longer; we were allowed to nitpick. This time, [producer (Arcade Fire, Animal Collective)] Scott Colburn didn’t let us do that. This stuff was still fresh.” The third track on Frontier, “Jaundice Giraffe” — the one that’s been getting them buzz on Seattle’s independent radio station KEXP, — was written the same week that the band started recording.

Their sessions for Frontier were filled with what Keenan describes as an “intense, rushed feeling”. To capture the intensity of a live recording, everyone was in the room together. There was no perfection. Mistakes weren’t necessarily fixed… and that was exactly the sound that lead guitarist Josh Gamble emphasizes they were going for.

Cotton often speaks about Frontier having a “Northwest sound.” When asked to clarify exactly what that means, he says, “A Northwest album has Vitamin E deficiency.” Everyone at the table agrees. He clarifies by saying, “It’s natural music; there is no style. When you figure out how you are good as individuals, that makes a good album. Let everyone do what they do.” In other words: no shtick.

“Our songs are lacking traditional structure, but they establish deep themes,” Posrednikov muses. “We do this stuff and we discover what’s in it as we do it.”

Frontier has been more collaborative than past projects: Keenan brings in a part of a song he’s been working on, Cotton mashes that together with his stuff, and, as they jokingly tell me, Posrednikov cuts out what sucks and creates the “fancy parts”. Even Gamble has gotten in on the process. He was writing music that he didn’t intend to use for the band, but when the other members heard the work, they got excited and decided to use it for the album.

Songs like “Ex-Blind man” showcase the improved lyrical skill of Keenan and Cotton. Lines don’t get much smarter or stranger than, “It was almost love at first sight/ But then some blind man stole your eyes…” Keenan’s use of repetition is infectious, like an earworm — one example of the pay-off the Feral Children get from their lack of restraint.

“Me, Me Just Me” takes this wild approach even further, with Keenan becoming a groaning rabid animal by the last twenty seconds of the song. The guitar in this track could be the source of welding tools or a test of the Emergency Broadcast System.

“Baby Joseph Stalin,” which might best be described as a shanty ballad, calls up images of bodies packed tight on dark, unstable boats in the middle of unkind waters. The shifts in timing on “Stalin” are trademark for Frontier, and contribute to the emotional journey this album embarks on. Stuck in the middle are lyrics like, “When I was younger I had a Che Guevara T-shirt/ But I don’t wear it ’cause it’s not cool anymore.”

In the minds of the Feral Children, the momentum that they are building up right now — what with scoring a record contract, working with a coveted producer, getting radio play — has been a long time coming. They had a previous band, Blood Alley Accident, but couldn’t get their act together; as a result, the project never went anywhere. Gamble claims to have quit the band seven times — at the very least. The members split up across the country, until, with Cotton in the lead, they trickled back to Seattle and found drummer Bill Cole. (Cole who could not make the interview, is described as “just as abrasive and as much of a dipshit” as the rest of them).

Since their reunion, the band has been putting everything into their music. They owe it to themselves due to guilt left over from Blood Alley Accident. “We had a false notion of what a rock band was,” says Keenan. Gamble chimes in, saying, “Now we’re making music that we want to [make].”

Second to the Last Frontier, which gets its title from a lyric penned when the Feral Children were still the Blood Alley Accident, closes with as much frenetic energy as it began with. The last track, “Zyghost,” sounds like a twisted take on the theme to Kids Incorporated. Every time it pants, there’s sentiment; every time they grunt, there’s uplifting keyboard accompaniment.

“Zyghost” also happens to be the most insightful song on Frontier. The tone of the album is captured in one phrase, “Thought he could hear the voice of God/ But he couldn’t hear a goddamned word.”

Combine that sentiment with Keenan’s proclamation that “the sky’s the same wherever you go,” and you’ve got a bleak but accurate existential commentary. It’s a perfect way to close an album that — if about anything in particular — is about the turmoil of being almost successful.

“This is it,” Gamble declares.

“Yeah,” says Keenan, “there is nothing else I wanna do.”

At its heart, Frontier is personal, filled with all that the Feral Children are going through as poor, alcoholic, heart-broken musicians trying to grow up. The band took their name from a documentary they saw about actual feral children. They felt some kinship with the subjects of the film, as they were living in the isolation of a double-wide, out in the middle of a swamp. It’s a bit different now.

These days, amidst listening to the Black Lips, Aphex Twin, Liars, and the local oldies station, they have relationship problems and they’re drinking and smoking as much as ever (or in Keenan’s case, drinking obscene amounts of coffee). But they’re satisfied with the “adjustment period” they’re in, moving toward life as professionals who have to deal with taxes and contracts and decisions about official album designs. At the end of the day, they’re just a gang of untamed twenty-somethings trying to live their lives the way they want to.