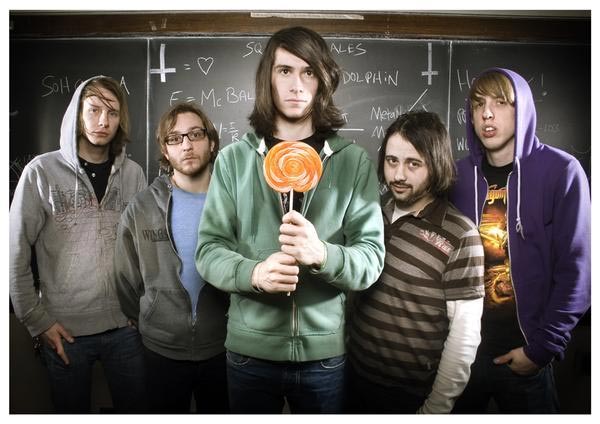 “Our friend is obsessed with wrestling and he thought of a bunch of hilarious band names. [2*Sweet is] kind of like a mix of ‘Nsync and World Wrestling Federation.” — Justin Pence

The name 2*Sweet conjurs up images of a suave group of young men in matching suits who woo the opposite sex with their sugary R&B harmonies and use cute nicknames like “Smallz” or “Face.” But the actual 2*Sweet is far from that image. Names, after all, can be deceiving… even if they are cheesy in nature. “That’s definitely where we were going with it,” says Justin Pence, 2*Sweet’s vocalist. “It’s actually from wrestling, I think. Our friend is obsessed with wrestling and he thought of a bunch of hilarious band names. He recommended that one to us, and we all thought it was ridiculous enough. It’s kind of like a mix of ‘Nsync and World Wrestling Federation.”

Though it’s a bit of a stretch, Pence’s absurd description is more true to the band’s sound than one would think. 2*Sweet’s members — which include bassist Dave Cronin, guitarists Pete Grossmann and Andy Nelson, and drummer Dan Polak — have been rooted in Chicago’s hardcore scene. Their members are present in bands like Not Enough Gold and Down Like the Rest, and their participation has clearly influenced the band’s self-described brand of “doom-pop.”

“We obviously listen to lots and lots of different kinds of music, and we haven’t really done a pop band before. [The idea] was very appealing to us,” recalls Pence. “We still write heavier sounding stuff, but it’s all about melodies and the pop formula. We gave it try and we all really liked it. We stuck with it and made our other bands side projects and made this one full-time.”

They ran quickly out the gates with their 2006 debut EP, Burning Alive in the Prairie State, which — though solidifying Pence’s knack for crooning sweetly over grim imagery — was indicative of the mall punk staple that has swept America.

“We were experimenting with pop-punk a lot… we just took the last five or six that we had written and threw them on an EP,” says Pence. “We needed to put something out, and we just wanted the newest stuff that we had been working on.”

Following the release of Prairie State, 2*Sweet ventured out on several tours, all the while honing in on their sound, which has translated into their latest effort, Sleep Without Dreams, their self-released full-length album.

Unlike their previous recording, Sleep Without Dreams is more true to 2*Sweet’s doom-pop genre, meshing metal guitar riffs, hardcore breakdowns, sweeping macabre instrumentation and gang vocals — all of which are guided by Pence’s operatic vocals. It’s a bit much to swallow, but once you get that first taste, it’s hard as fuck to spit it out.

“It takes people a while to stomach us, and we’ve come to grips with that,” admits Pence. “The labels weren’t falling over backwards throwing insane stuff at us. We figured out that we could do this just as efficiently on our own — if not better in some ways — than [we could] working with a label.”

C. Walrus, the band’s homespun record label, has already been efficient enough to get 2*Sweet on the road with the likes of I Am the Avalanche, Set Your Goals, and Michigan upstarts, Fireworks. And if you’ve taken a look at their MySpace lately, you’ll notice that they have a good chunk of the year planned out for them.

Even with all that, 2*Sweet — as true to their name — has something sweet in mind for their release show (which will have happened by press time).

“We’re doing a ‘Sleepover Without Dreams‘ [show] and everybody’s just urged to wear pajamas and comfortable clothing. There’s gonna be visually appealing things that are just very pleasant looking,” says Pence. “Maybe we’ll play that game where you say something to someone and it goes down the line and comes back completely different.”

And Pence would know something about being different, as his band’s constantly evolving sound is something that’s not only unexpected, but 2*Sweet is a silver lining in an otherwise dark cloud that is the current state of music.