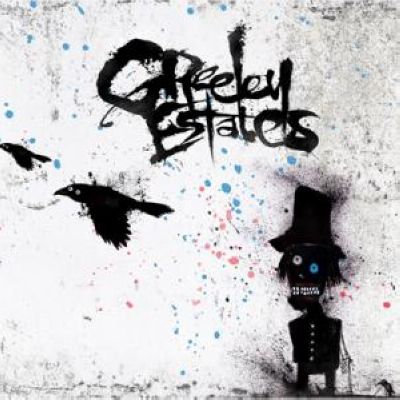 I first made aware of Greeley Estates in late 2005; they were a “little band” that had jumped on a few tours that brought them through Orange County, California. In 2006, I was asked to do my first interview with a few of the guys from Greeley Estates at a little hole-in-the-wall venue for the release of their first LP, Far From the Lies. It is fun for me, as a writer, to be able to recap on their growth, as well as my own, over the years and see that they are becoming as successful as I had alluded to a few years back. Before I get off my pedestal, I would like to point out that their newest album Go West Young Man, Let the Evil Go East, is an example of the full potential that Greeley Estates has been building toward — however difficult that journey has been.

I have not kept tabs on these guys since their last record release but it is obvious that a couple years of touring and writing can go a long way. Right from the start of the album, Ryan Zimmerman, lead vocalist, shows he has developed his voice in all aspects of his artistry. Greeley Estates “2.0,” if you will, comes fully-loaded with high and low hardcore screams that add a fun new dynamic to the mix. From a lyrical perspective, the tracks are organized chaotically from start to finish with an unpredictable mesh of pop and hardcore sounds that is the Greeley Estates experience. The same explosive flair that has grabbed the attention of its listeners since “Y’all With The Vampire Squad?” from their first EP will continue to engage and energize the fans with new tracks like “Desperate Times Call For Desperate Measures” and “Let the Evil Go East.” These tracks break any stylistic boundaries previously placed on them, through the increased inclusion of metal-based riffs and random shout-out vocals. The energy and completeness of Go West Young Man, Let the Evil Go East are impressive, and I anticipate a heavy live experience to match.