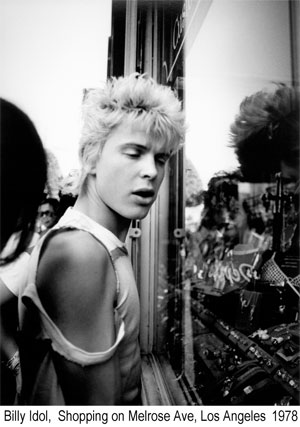 Unguarded Moments: Backstage and Beyond will showcase photos from a time when artists like Billy Idol and Iggy Pop were making waves in the music scene. Backstage and in homes, Kereakes’ photos capture the moments in between the sell-out shows, giving regular everyday fans a glimpse into grandeur. Kereakes’ first photo shoot was for the legendary punk band The Germs, which pulled her into a world of music from the late ’70s Sunset Strip scene. The show will feature images of The Germs, Joan Jett, Billy Idol, The Cramps, The Ramones, The Dead Boys, Debbie Harry, and many, many more talented and influential artists.

Billy Idol is HOT, HOT, HOT! Then and now!