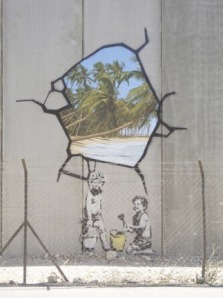 Banksy is legendary. In the UK, he’s pretty much a household name. Yet, mysteriously, very few people know who he really is. Those who do have done well through the years in keeping his name secret from the real public.

Much of Banksy’s work is humorous, and others have been known for subverting the media and popular icons. He’s had pieces of the Mona Lisa with a rocket launcher, crafted his own fake copies of Paris Hilton’s debut album, and made one of the UK’s most famous graffiti pieces — the one of two policemen kissing. Many of his projects have no doubt walked the line between the legal and the illegal, and some have clearly been illegal. Yet, no one has truly known who he was, and he has been safe from much scrutiny because of it.

But today the Daily Mail published an article that reveals who Banksy really is — or so they claim. It shows pictures of his work and house ‘he’ grew up in, reveals ‘his’ full name, and practically tells ‘his’ life story before he became Banksy. The article closes with a quote that Banksy by Banksy himself, saying to Swindle Magazine, “I have no interest in ever coming out. I figure there are enough self-opinionated a**holes trying to get their ugly little faces in front of you as it is.”

So why would the Daily Mail decide to share all this information and more (given that it is true)? It seems rather disrespectful.

If they aren’t correct, what about poor Robin Gunningham? Harassment incoming? People seem to be citing obituaries that detail a couple of deceased Robin Gunninghams… but that’s hardly worth anything, because who knows how many there are?

What are your thoughts on this?

The Daily Mail eh… must be true then