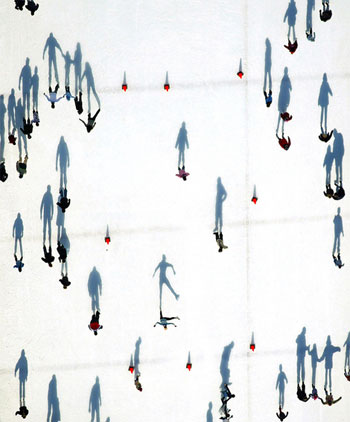 An Oldie But Goodie By Vincent Laforet! Previous New York Times journalist, Vincent Laforet shot this photo in 2004. Taken at the Lasker Rink in New York City from the overhead vantage point of a helicopter, the piece captures a moment in time that makes you think twice. The piece is aptly and cleverly titled: “Me and My Human”.

Since 2004, Laforet has shot some extremely powerful images generally falling into two different genres: photojournalism and aerial. He has an innate ability to capture patterns in human behavior from the air in a way that makes us look like miniatures, and a skill to capture dramatic moments in human history, such as those from Hurricane Katrina or war protests.