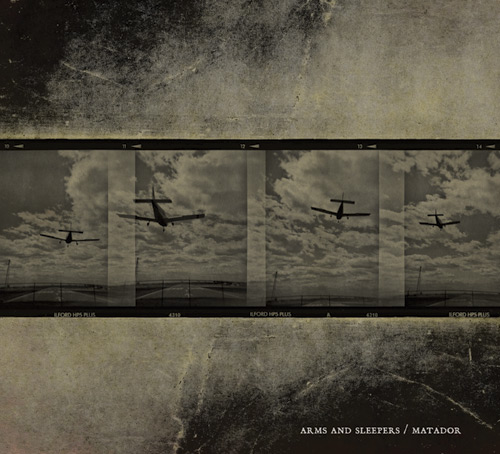 The lead-in to Arms And Sleepers’ new disc, Matador, is only a little over a minute, but it does what it’s supposed to. In just that short time period, it wordlessly sets the stage for the rest of the disc, with twinkling keys pricking in and out of the background and strings gliding over its surface. With ease, the song harnesses the imagery of water sparking in the moonlight, marking it the first of many visuals to come.

With Matador, Arms And Sleepers have created an ambient blend that really works. The title track is slow and contemplative, ushered along by sorrowful violin, occasional guitar, and manipulated vocals. “The Architekt” follows, giving the listener just a taste of what it would be like to be weightless and visiting a foreign planet basked in sepia tones. Echoey piano and airy male-female vocals, courtesy of Ben Shepard and Catherine Worsham, propel this visual along until it dims slowly out of sight.

The whole ten track album floats along like this, showing off flurries of different instrumentation and vocalists along the way. Matador is a body of work that’s instantly relatable — cinematic in its imagery and full of emotions as diverse and complex as human emotions really are. At times, the effect is subtle, with emotions bleeding slightly into one another; sadness is tinged with undertones of happiness and desire fades slightly to reveal hints of satisfaction. Other times, an overt mood shift occurs, with musical grey clouds disintegrating into angelic vocals and epic crescendos which stop as quickly as they began.

Ultimately, the abundance of visual imagery created by Matador contributes to making it an easily repeatable listen. Its introversion and sincerity make it a foreign, yet strangely familiar place to feel right at home in.

For me this album is one the best albums of 2009 of Post-Rock. Although i find it pretty short, the total of 8 tracks with normal lenght feels a little strange coming from Black Paris 86…but nonetheless you can really get the feel in every song, is very well crafted.