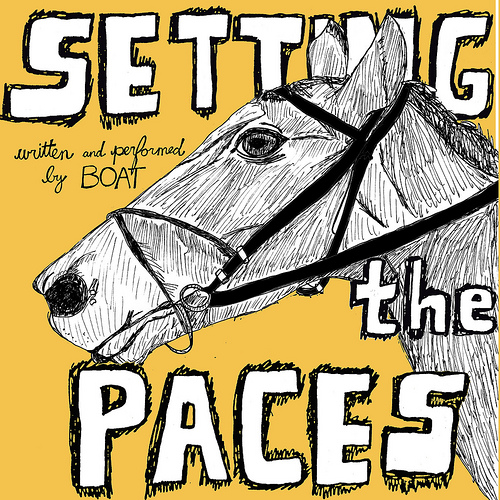 With Setting The Paces, BOAT has written an album that slots into my demographic with an almost startling precision. Did you spend your mid-to-late-twenties in the Pacific Northwest? How about a wannabe Northwest town like Madison, Wisconsin? If you answered “yes” to either of these questions, then Setting the Paces will surprise you with its detailed description of the life you are living — literally living — right now.

Getting the brass tacks out of the way: if this album hits the big time, it will be on the legs of radio-friendly single “Lately.” Opening and closing with a Modest Mouse-y guitar riff and post-disco beat, this track leans to the danceable side of head-nodding. The strength of the composition and memorable melody deserves some play; here’s hoping they get it.

You know what band I really liked when I was in middle school? Weezer. Also, They Might Be Giants and Green Day. I can tell that the guys in BOAT were in middle school around the same time I was because “Tough Talkin’ the Tulips,” “Name Tossers,” and “Jeff Fell Dream #48” pay subtle homage to exactly those bands, respectively. BOAT succeeds in picking out everyone’s favorite elements from the pop alternative of 90s yesteryear — a keyboard riff here, a wide open acoustic arpeggio there — and threading them through the daily detritus of young adulthood.

A lot of the people I know move around between Portland, Seattle, and Alaska. So when, at the really catchy part of “Lately,” I hear “Move up to Seattle/ Not up to Alaska/ My teeth won’t ever chatter/ It doesn’t really matter,” it strikes me that a song has finally been written about my immediate circle of friends. “Tough Talkin’ the Tulips” concerns, among other things, not being able to help your friend move across the country because, “My car can’t make the trip.” Wasn’t I just having that conversation?

Other hilariously pertinent songs include “Interstate 5” and “Prince of Tacoma.” Actually, I’ll be driving I-5 down to Tacoma this Sunday. How did you know that, BOAT? Have we met?

Setting the Paces is a cozy, unassuming collection of alt-pop singles that feels like it was made in my buddy’s basement. Write another song about being 27 in Seattle (they do in fact identify their age, which is also my age) and hang on to your teaching jobs. Maybe we’ll bump into each other at a conference or something.