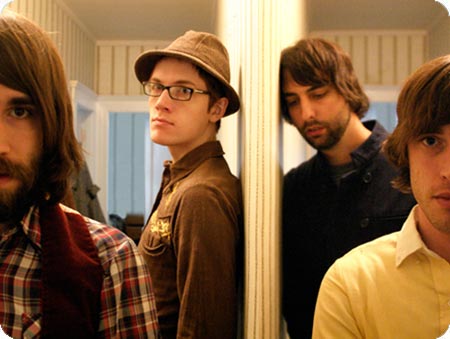 “I think the timing is right right now. We’re really psyched about the record, and we just felt an agreement that this was a real time to strike.” — Christopher Pappas

They’ve blown up their local Boston scene and achieved success through their DIY efforts, but with their new self-titled disc comes a new approach; The Everyday Visuals are ready to bring their music to an indie pop-loving public. It begins with a stint at SxSW, a video interview with REDEFINE, and an exclusive a capella singing session. Is this your first SxSW? What do you think?
Pappas: It’s a little overwhelming at first. We got in on Wednesday, but we’re slowly getting the hang of where things are.
Scheer: And how to pace yourselves.
Pappas: Drink the free beer and what not, too.

I’ve heard of the horrors of being a performing band. Have you guys met with any of those horrors?
Pappas: No, everyone’s been super nice and helpful. It’s been really smooth.
Scheer: Parking’s kind of a pain.
Seiders: Yeah, the parking.

Did you guys drive? Rent a van?
Pappas: Yeah, we drove.
Seiders: Yeah, we have a van and trailer.

Your disc comes out in a month. What are you doing to promote it?
Pappas: As much as we can. We’re touring a bit after SxSW with some friends of ours. We’re going to be playing shows then and doing another regional run in late April. Just trying to get the word out that way.

Was it mostly Bostonians that showed up at your SxSW show on Thursday?
Seiders: No, I didn’t really see any Bostonians.
Pappas: There were a few familiar faces, but…
Fredrickson: It was all new people.

How do you think they heard about you?
Seiders: Ohhh!
Pappas: SxSW did a short write-up about us a few days before the festival, like on the 17th or whatever. Maybe people checked us out there. I don’t know.
Fredrickson: It’s always a mystery how anything happens, because you don’t know how anybody hears about you or how they find you.
Pappas: If we knew that, we’d be marketing geniuses. We’d know exactly where people heard about us, so we could always just go to that source.

You mean you’re not omniscient?
Pappas: We’re not good at the business aspects.
Scheer: One time I was [ominiscent].

You guys were promoting and booking yourselves prior to this disc?
Pappas: Yeah. We’re very DIY.

What made you finally decide to transition? Do you wish you’d done it earlier, or are you satisfied with doing it right now?
Pappas: I think the timing is right right now. We’re really psyched about the record, and we just felt an agreement that this was a real time to strike. There was a lot of upswell in Boston, and we really felt like we could expand it nationally if we hired the right people… I felt like it was a natural progression.

How does this disc differ from the other two?
Scheer: It’s better.

Not good enough of an answer!
Pappas: One thing we’ve always struggled with as a band is we’re a band that likes to have really chaotic loud parts but also likes to be about as quiet as we can sometimes. And I felt like that often left our records very schizophrenic because there would be like a really noisy, almost feedback and noise song, and the next song would almost be like a country folk song. And I think that in this record, what we were able to achieve more is taking both of those sounds and find a balance between them and have a consistent synthesis of those influences.
Scheer: Creating a real identity.
Pappas: Yeah. I think we always try to have our sound be more cohesive, but I think for the first time on this record we’re really succeeding at it.

What instruments do you all play? It seems like you each play a bunch of instruments.
Seiders: I really started on piano when I was young. So yeah, piano. Drums.
Zembower: Accordion.
Seiders: Well, accordion that kinda falls into… I don’t really know how to play accordion. There’s all kinds of buttons on the left you’re supposed to play, but I just do the keys, because it’s pretty much like playing the piano.

We were pretty amazed that the drummer knew how to play the accordion.
Seiders: Yeah, it’s not something you see every day, but I pretend. I don’t really know how to play it.

Who’s next?
Fredrickson: I, uh…
Pappas: You play lute!
Fredrickson: I used to play classical guitar, and I played Baroque lute for a while.
Seiders: [At cawing bird] SHUTUP!

What’s that?
Pappas: It’s like a medieval guitar.
Fredrickson: It’s a Baroque instrument.
Seiders: [At cawing bird] Shut the fuck up! Look at this guy!

Oh, a Baroque lute!
Fredrickson: Yeah, Baroque, from the Baroque period. I got rid of that thing. It was kind of a beast. I also play a little banjo and mandolin on the side. It’s kind of a hack, but it’s fun.
Scheer: Mostly Kyle just wails on the electric guitar.
Seiders: Yeah.
Zembower: I think everyone’s a little multi-instrumental. Everyone plays a guitar, string instrument…
Seiders: Everyone plays a little keyboard…
Zembower: Everyone can play keyboard…
Seiders: Everyone can sing pretty okay.

How do you guys come up with your vocal style?
Zembower: Beach Boys?
Seiders: We definitely take a lot of time, you know, arranging vocals.
Pappas: There’s something really like, organic about singing with people, you know? I think it’s different from playing an instrument. When you sing, it’s you. It’s your voice. You can’t really switch it out, and so, to sing with people and have that common experience together — there’s something that feels good about it. It’s visceral. When we sing, and we lock, and it’s in tune, it just feels nice, you know. I think we just really love having that feeling when we’re playing live, which is why we sing so much together.
Seiders: Yup.
Pappas: It feels good.

Do you guys sometimes wish you were an a cappella band?
Pappas: Yeah, a barbershop quartet. Quintet.
Seiders: We throw a little bit of that in there sometimes. We’ll stop the song and do a little a capella verse or something. That’s the closest we get to a capella stuff. No beatboxing.
Fredrickson: Cause a capella stuff is actually pretty terrible.

Your new disc had a different recording process than usual, yes? Or no?
Pappas: It felt like it was pretty on par for us.

Well, your press kit lies, then.
Fredrickson: Well, this time I think the mixing process was a little bit more… communal, or I don’t know what you call it… shared. The last album was only mixed by maybe one person and myself and our bass player did a bunch of other stuff. This time around, we had a lot more band members involved in the mixing process.
Seiders: Yeah, it was fun to see if we could have different people mixing but still have a cohesive record.
Pappas: You know what? I think I know what the difference was. I think I know what the press kit was talking about. I don’t think it was only in the mixing process. I’d be recording guitars or vocals by myself while Joe would be recording a keyboard part on his own, because we all had our laptops synced up to be able to transfer files back and forth. I feel like all kind of cooked each different part of the record and brought it all together like a potluck and sorted it all out, and that’s how the record came together. Usually, the last record, it was more like a single studio vibe; it just happened to be at our house. It was like one computer, and if we wanted to record, we went up there, and we tracked.

What is your songwriting process like?
Seiders: That’d be Chris.
Pappas: It usually starts with me writing a tune on an acoustic guitar. Sometimes I’ll have everything I want mapped out in my head, like the vocals and drums and stuff like that, or sometimes I’ll just have like, a song, and we’ll work on it. I always say that I bake the cake, and they frost it. They’re the icing on my cake. It’s a birthday cake, too, and everybody’s invited to the birthday party.

Our video is going to be a five-minute teaser, so say something insightful for it!
Pappas: I have to say that music ’tis the universal language. And we are all passengers on this cosmic train heading towards the sun, and the sun is the golden child of Neptune.

I don’t think heading into the sun’s a good thing.
Pappas: You wouldn’t. Just wait ’til you get there, though. Don’t judge a book by its cover. Is that insightful or just nonsensical?

It’s pretty awesome. Anything else?
Seiders: I could quote a great philosopher, [our guitarist] Eli Scheer. “Apologize for nothing.” End of story.

Anything else to add?
Seiders: People can go to iTunes on April 14th or go to CD Baby.com and get our record, and then listen to it, and then like it.
Scheer: And check out our website.
Pappas: Yeah, our website, theeverydayvisuals.com, is actually pretty banging right now.
Seiders: We actually update it. It’s pretty cool.
Pappas: We got so frustrated with our old site. Eli made us the new site. We’ve firmly stepped into the 21st century. We Twitter now, and we blog, and we put pictures on our Flickr…
Seiders: Videos on the YouTube… kids like that.
Pappas: I don’t know if you kids have heard about The YouTube yet, but apparently, it’s a tube… where you… can view… videos.
Seiders: We’re on it.
Pappas: We’re on it. Look us up.