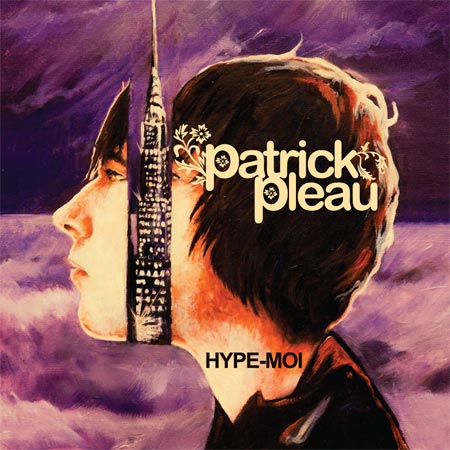 Singer-songwriters are very rarely my thing, because let’s face it; the majority of them are boring and seem to think that an acoustic guitar, a voice, and minimal songwriting talent are all you need to make it in the music world. Hence, my complete surprise when I randomly received a press release to download Montreal’s Patrick Pleau’s Hype-Moi for free. I downloaded it without so much as a second thought or even an initial listen until weeks down the line, but weeks down the line, I was absolutely blown away. Everything about this disc, from the production to the arrangements and the instrumentation, are top-notch. It most certainly could not have been a one week recording process or a lightly-considered project. From the sounds of it, everything was carefully prepared, and it pays off.

Pleau avoids a problem many singer-songwriters seem to face — the problem of one-dimensionality. The tracks on this disc, which is completely in French, run the absolute gamut of songwriting ability, and the main strength of this disc as a whole is its ability to morph from one emotion to another without problems. Slightly funky and electronic indie rock jams like “Valérie” are followed up by jazzy coffee shop tunes like “Café Noir” without incident. “Tous Les Clichés Du Monde” is a tender, minor-key ballad backed by electric guitar riffs and inventive percussion, but is surprisingly concluded by an epic drum n’ bass breakdown which would be out of place if it were on a different disc. On Pleau’s disc, however, it feels right at home.

From the first note to the last, “Cimetière Lunaire” is a moody, nostalgia-inducing piece that immediately draws you in and makes you feel the romantic way actors in movies must feel on the streets of Paris. Although Pleau is not French, the disc is reminiscent of much mainstream French pop, with songs backed by miscellaneous instrumentation and melodies that are simply rather epic.

Hype-Moi is quite an achievement for Patrick Pleau, and hopefully, it will help to solidify the idea that good music does come out of Canada.