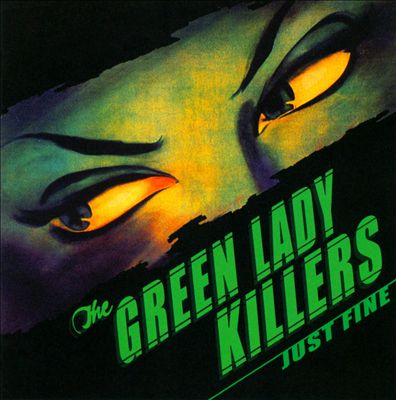 The Green Lady Killers are well-produced, but their album, Just Fine, is repetitive and too familiar. The guitar chords are the same, the drum beats the same, the style the same; everything is the same stuff we’ve heard time and time again.

Let me paint a picture to help you understand this band. Imagine a Cramps theme regarding make-up, costume, and style, add in The Stooges’ guitars and melodies, and put in P.J. Harvey as the lead singer. It’s really that simple. Some of the songs sound almost exactly like The Stooges or P.J. Harvey songs, which I find to be disgruntling.

Now that I have pegged them, I will discuss how the album sounds. Like I said, it’s well-produced. It’s clean, and they clearly worked extensively to make sure they didn’t lay out the tracks until they were perfect. The vocalist has a nice voice. You know those rare P.J. Harvey moments where you are like, “Wow, she’s got a great voice; why doesn’t she do that more?” That’s how this singer’s voice is.

The instrumentation is simple; they can all play, but they appear to stay limited in their comfort zones. The drums and guitars are painfully repetitive. There’s a lot of layering in the album’s production, though, which makes it sound better than it is, and moreover, leads me to believe that seeing them live would be a letdown. Now, they do have a garage sound going for them which could lend a hand during a not-so-hot performance, but I think these girls need to get a little dirtier if they want to be successful “Killers.”

My advice is stop with the late ’70s sound that people were already regurgitating in the ’90s, practice some new combos or riffs when you practice your instruments, and stop with the P.J. Harvey thing, whether it’s intentional or not. We don’t need another P.J. We don’t need the ’90s, either. But an audience can always use more sludgy garage bands. These girls are trying to come off tough, but I think they are probably really controlling about cleanliness and organization. They should stop showering, let their impeccable makeup jobs smear, stop doing another take, and start fucking up a little. And the singer should scream or yell more; killers are not supposed to be pretty. Killers are criminals, therefore these girls need to act the part a little more, else change the band name.

This was a review that turned into an advice column to the band, but I see a lot of potential for these girls which is, as of now, unmet. The Green Lady Killers’ Just Fine is about all it’s going to be, and just fine doesn’t cut it on tour or with sales. Make it fucking fantastic and get back to me when that happens, ladies.

We had the opportunity to share the stage with them one night and let them use our PA. I was completely entertained as was the crowd. They were tight and well rehearsed. Their look was contemporary. Don’t change anything. Maybe a little loud for me but…

Hate to break it to you Emily, but your assumption about The Green Lady Killer’s live shows couldn’t be more wrong. I guess that’s why they say when you assume, you make an ass out of u and me.

The Green Lady Killers is one of the few bands that is near perfection every time you see them live. The sound is ALWAYS top notch, and the performance is incredible. If you actually did see them live, their "impeccable makeup jobs" would make sense. It helps them deliver an intensity that drives the crowd wild. There isn’t one guy in the audience who isn’t getting chills when he locks eyes with Cherrybomb as she stares him down.

As for the music… while simple… it is incredibly catchy and I find myself playing any number of their songs in my head for weeks after a show. If that isn’t a sign of a good band… I don’t know what is.

First, Emily needs to quit repeating the pj harvey comparison – it’s repetitive and uninformative. If she wants to be taken seriously as a writer and reviewer, she’ll come up with some original and enlightening thoughts.

Second, if she hasn’t seen a live show, then shut up about live shows.

Third, maybe focusing on a actual SONG or two, with lyrics, would go a LONG way in helping us to learn about this band and their music.

The reviewer seems to have the pre-conceived notion that all girl bands that play rock should present themselves to be as dirty and un-fuckable as L7. I disagree. Stay sexy, ladies.

I also strongly disagree with the advice that ANY band should spend lots of time and money on a recording to make it sound like they didn’t. Hogwash. The clarity and bite of your recordings is part of their appeal. No need to pander to the “lo-fi or die” crowd.

I love this record . They are incredible live and I happen to enjoy their impeccable makeup. The girls can play, write and they are God given hot so why should they play any of that down?

The Green Lady Killers Band has cool styles and looks. Haters should watch out.

Lady Van Buren, although she looks goth, she is one of the vocalist. As I watched their video in their myspace profile, Lady Van Buren’s voice is awesome.

Anne and Cherrybomb both rock..

Their music and songs are interesting to listen to. I put some of their songs in my myspace profile.

I would write a good article about them.

I’ve listened to the album, I’ve read this review and the responses, and even though i have never seen this band live, and agree they are three hot chicks, regardless, the music is predictable, definitely not very original, the same timing throughout almost every single songs, the bass lines are basic and quite boring, and I just couldn’t bare to make it through the entire album.

I don’t hate the music, I just found it very basic and very predictable and not at all engaging.

An interesting note – is it about the music, or hot chicks with great makeup? Well, in today’s market-driven industry, it’s obvious that sex definitely still sells, and that the music is secondary to that.

As their makeup artist, thank you for recognizing their makeup. 🙂 these girls were amazing live and always engaged the crowd. I’m sorry if you were never lucky enough to get to see them. 🤘🏽