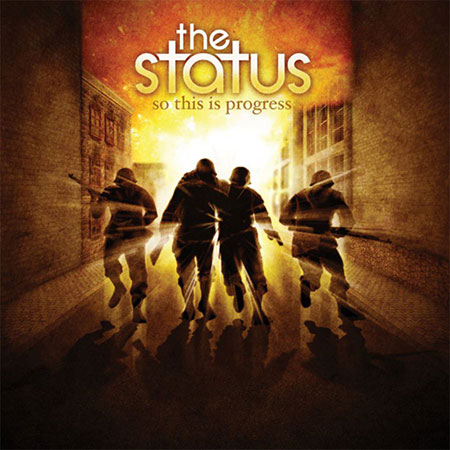 The Status – So This Is Progress Album Review The Status’ ironically titled So This Is Progress reminds me of the halcyon days of pop-punk where bands like SR-71, Riddlin Kids, American Hi-Fi, Sum 41, and Trouble Is all (briefly) took over airwaves. While bands like New Found Glory have made a longtime career (especially in pop-punk years) out of their reign as a charting band, most have become subject to bargain bins and made to be fodder for memories, which seems to be the direction that The Status seem to be heading in.

Despite guest players such as Adam Lazzara (Taking Back Sunday), Anthony Raneri (Bayside) and Will Noon (Straylight Run), So This Is Progress is largely forgettable from the first track forward. The lyrics are fairly generic and solidifies my suspicion that somewhere out there an “Emo Mad Libs” exists where bands like The Status are able to ape their words from. Like the lyrics, the music itself seem to be made up of the same three power chords, played in a different order. The Status is so difficult to listen to that if you even get to the title track, which is arguably the best song on the record, you should be awarded some sort of medal of valor for listening to the previous 15 minutes of mind-numbing pop rock.

Perhaps The Status should’ve reconsidered naming their album to something more appropriate like So This Is A Potentially Forgettable Radio Hit or Don’t Heckle Us Because We’re Opening For Your Favorite Band! because this is anything BUT progress.

dear ryan,
same 3 power chords? I’m no musical genius but even I can respect the fact that the status incorporate more inversions and harmonies in their chords than all the bands you mention in your review. Maybe you should come up with a more original review, or take the time to really listen to a record before letting out your jaded views of what’s gone wrong with pop rock and classifying every band as the same as some other band. no offense but I disagree with your review of this record.

this band is terrible. get over it, son.