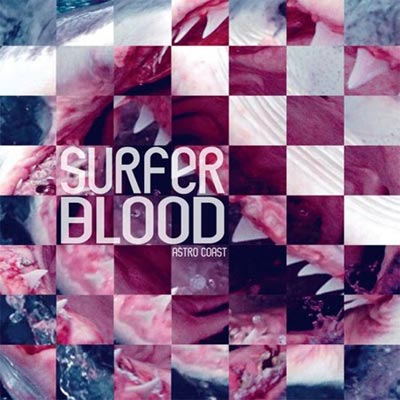 Surfer Blood are a weird anomaly: they hail from West Palm Beach, FL, home of Jewish grandparents and all things octogenarian, yet they make refreshingly current indie-rock. The first single from Astro Coast, “Swim,” has been all over the internet, with critics and bloggers gushing — and deservedly so. It is such a fun, catchy tune, and exactly the right amount of upbeat giddiness to not seem saccharine. It is so much fun, in fact, that it has been stuck in my head for days. And that hasn’t happened in years! A pop song (term used loosely) worth listening to over and over again for actual musical value? Astro Coast is a record that is quirky but might justifiably stand a chance in the mainstream. A rarity in this day and age!

It is impossible not to see Surfer Blood as a hip, indie version of The Beach Boys, without the drama or crazy outfits. Despite their overly sunny disposition and cutesy sounding song titles, the band manages to be innovative and keeps it interesting. It may appear simplistic and similar to the surf rock genre on the surface, but delve deeper, and it is clear that they mix it up from song to song. The opener “Floating Vibes” is a perfect example of this updated yet classic rock sound. Typical surfer rock sound in the beginning, but more complex layers and a nice instrumental intro make Surfer Blood sound like we can imagine The Shins would if they had been born in a beach town instead of land-locked Albuquerque NM. “Take it Easy” seems like it should be Surfer Blood’s anthem; it just screams pf breezy care-free attitudes, conjuring up images of milkshakes and rollerskates. The vocals are so perfectly harmonized you could swear that they have been performing for decades — not just a few years.

What shows the band’s diversity and that their influences are not just limited to the ’50s and ’60s is their harder edge in tracks like “Harmonix,” “Anchorage,” and “Neihbor Riffs,” where there is the hint of Television, Mission of Burma and spaced out Brian Eno. They go back to their pepped up jams on “Twin Peaks” (a pessimistic love song), for most of the rest of the record. A fun contrast comes towards the end with the mix of “Fast Jabroni” and “Slow Jabroni.” The first is quite frenetic, and the second is very calming, but both are equally pleasant.

To that effect, Surfer Blood are an agreeable mix of paradoxes. They seem poised to be a mainstream hit yet they maintain that special je ne sais quoi of indie rock. As they say so honestly in the lovely song “Anchorage”: “I don’t want to spin my wheels/ I ain’t got no wheels to spin.” Well put, boys. Direct message to the band: Let’s hope you remain that humble in the face of your inevitable success. Just keep making records with the fervor that Astro Coast has. You’ll be fine.

Written by
Add comment
Noah And The Whale – The First Days Of Spring Album Review
The Status – So This Is Progress Album Review
wpDiscuz
0
0
Would love your thoughts, please comment.x
()
x
| Reply