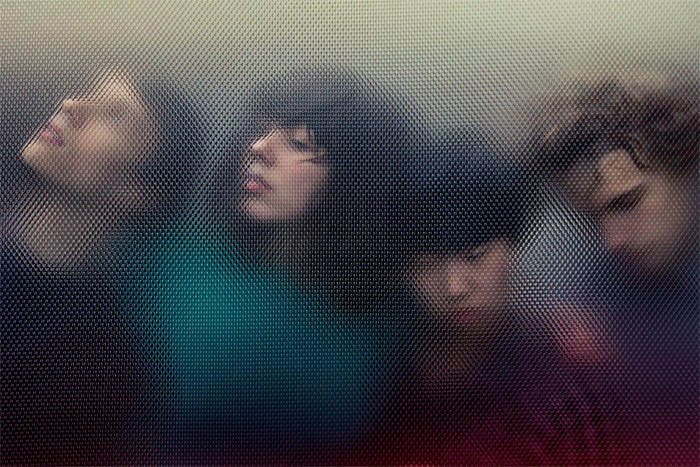 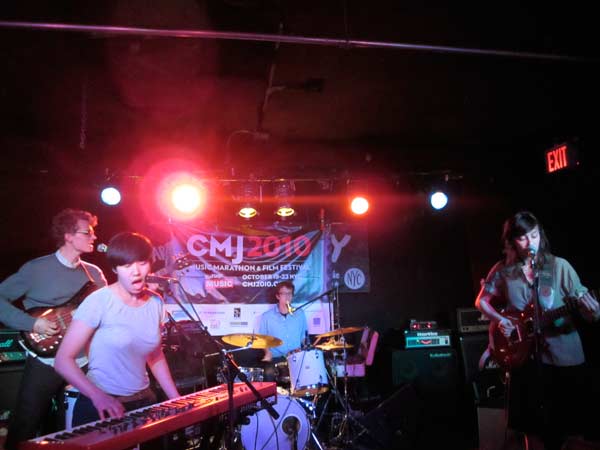 (Thursday, 10/21, M For Montreal Showcase, Arlene’s Grocery)
Hailing from Montreal, Braids played on Thursday night at the M For Montreal showcase at Arlene’s Grocery. They blew me away with their art rock style and use of vocals as instruments, although their songs do have intelligible lyrics. They created a lush soundscape using lots of pedals, mixing boards, and loops, as well as creative methods like licking their lips and blowing into the mic. Their debut album will be out in January on K9 Records.
www.myspace.com/braidsmusic 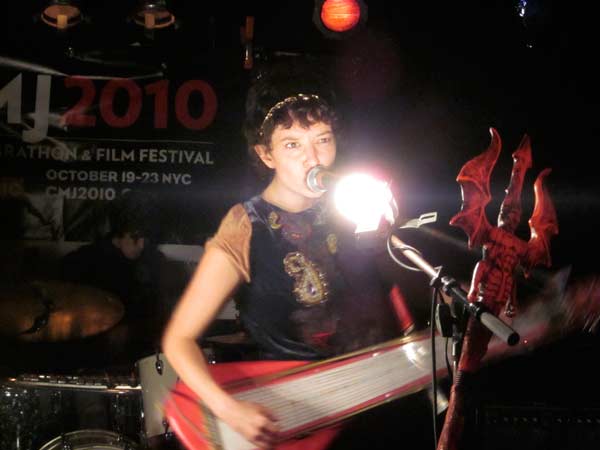 (Thursday, 10/21, M For Montreal Showcase, Arlene’s Grocery)
For several songs, lead singer Jessie Stein busted out the Moodswinger, a 12-string electric zither designed by the Dutch experimental luthier Yuri Landman. Pietro Amato made good use of the French horn, sometimes blowing into the wide end for an echo-y effect. They also used some creative DIY lighting, employing simple naked lightbulbs screwed onto boards around the stage that were flashed at various times. Their set was energetic and catchy, and it is obvious this band has big things coming up in the near future.
www.theluyas.com

(Thursday, 10/21, The Delancey)
The two sisters from Sweden, known as First Aid Kit, made a huge impact on the audience at the Delancey on Thursday night. While they initially had to shush some people talking in the back, they soon had everyone’s rapt attention with a mic-less version of “Ghost Town” that I’m pretty sure gave everyone chills. They did employ a drummer on most of their songs, which gave them a fuller sound, including on their now famous cover of Fleet Foxes’ “Tiger Mountain Peasant Song.” Many of their song motifs are old timey and antiquated, about courage and honesty and long ago periods, much like The Decemberists’ lyrical themes. With titles like “I Met Up With A King” and “The Lion’s Roar” and the utilization of a harpsichord, their sound is rather old fashioned in a way — and I mean that as a positive. Definitely a band to watch in 2011.
www.myspace.com/thisisfirstaidkit

(Saturday, 10/23, Brooklyn Vegan, Public Assembly)
These guys from Detroit played a bunch of shows, but I didn’t catch them until Saturday afternoon. The eager crowd was in good spirits for the middle of the day, and Joshua Epstein and Daniel Zott did not disappoint. With Dale Earnhardt Jr. Jr. donning trucker caps and wearing full-on Nascar uniforms (sponsored by Cheerios and Lysol) I was expecting a somewhat gritty, hipster sound, but when the vocals came through, they were beautiful; it was obvious these guys had talent. Songs like “Simple Girl” and “Nothing But Your Love” are not what you’d expect from these dudes, but either way, they are excellent.
www.daleearnhardtjrjr.com 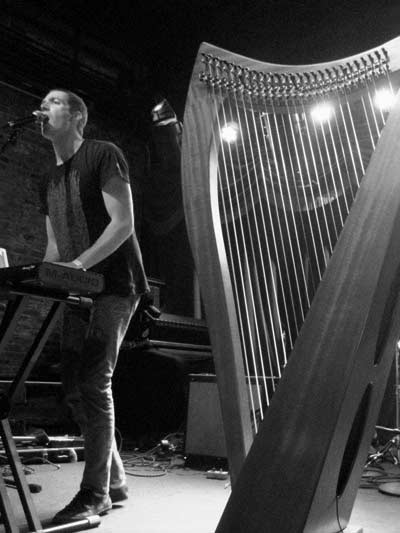 (Saturday, 10/23, Pitchfork #Offline Festival, Brooklyn Bowl)
Active Child is the band of “choirboy-turned-indie pop musician, Pat Grossi,” according to his website. Inexplicably, he only played one show during CMJ. Grossi’s choral training became apparent as soon as he opened his mouth, with vocals ranging from high highs to low lows. He alternately played a small harp and keyboard, and he had someone playing bass, with drumbeats coming from a computer. Songs like “Wilderness” and “She Was A Vision” were lush and ethereal, with Grossi’s Tears for Fears and Joy Division influences clear. Not only was Grossi’s voice extremely graceful, but even the way he hunched over the keyboard was elegant and fluid. His EP, Curtis Lane, is out now and I expect big things from him in 2011.
www.activechildmusic.com

(Saturday, 10/23, Pitchfork #Offline Festival, Brooklyn Bowl)
Matthew Dear unleashed his dark side with his latest release, Dark City. He played a good amount of shows at CMJ, including some that were exclusive and hard to get into. I finally caught him on Saturday. He looked dashing in his full tuxedo, while his bandmates just wore the jackets. Their noir look went perfectly with the heavy and dense music, especially with “You Put A Smell on Me,” which beckons the listener for a ride in his “big black car.” Dear’s latest incarnation is quite a change from 2007’s Asa Breed, which was much more bubbly and poppy, but his signature dance beats are still there, and the hips were still swaying at the show.
www.matthewdear.com

To see more of Devorah’s photos, check out her blog, here.