Judy Nelson5 min readOctober 23, 2010Add comment
The word “marathon,” when applied to CMJ is quite literal; it involves a lot of running around from place to place, trying to catch every single bit of amazing music that you can soak up. Here’s some of my favorites from what I was able to catch.

(Tuesday, 10/19, Mercury Lounge)
This was our CMJ crew’s first surprise discovery of the week, and it was a pleasant one. Originally a duo called Pete & J, NY-based Harper Blynn changed its name a few years back, and I think a lot of the band’s success can be attributed to this name change. Let’s face it; Harper Blynn just sounds smoooooth. Their set was really fun and lively, and the music was pop-catchy in that good, dancing-required sort of way. What really sealed the deal for us was their last song, a cover of Beyonce’s song “Halo.” We couldn’t stop singing the song afterwards, and to tell you the truth: we like their version better.
www.myspace.com/harperblynn

(Wednesday, 10/20, Santos Party House)
I heard many grumbles in front and in back of this cramped room about Marnie Stern’s voice. You know what, folks? It’s not really about her voice. It’s about what an INCREDIBLE guitar player she is. Maybe that’s overshadowed in a crowded hipster-critic room, but if you read reviews, and more importantly, actually listen to her records, you should know what to expect. The girl shreds like you haven’t seen a 5’4″ blonde girl shred in a long time, if ever. I really enjoy her frenetic, Hella-on-acid style of playing, and I don’t think the vocals are the focal point. This is just a personal opinion; I also think that the constant references she makes to her barren sex life and other “personal” parts during her song break stage banter are hysterical. It’s all a matter of taste with Marnie Stern, and if you can’t appreciate her humor and guitar talent, then she isn’t for you.
www.myspace.com/marniestern1

(Wednesday, 10/20, Santos Party House)
It is often hard to translate the exact feeling that you get from listening to an album into live show, and this shouldn’t necessarily always be the case. Wild Nothing was great at performing live with that same ethereal, translucent quality of its recorded dreamy indie pop, but also manage to make the music sound different and interesting. I could have taken a little bit more in terms of stage presence from them, but I was happy enough to be seeing them play some of my favorites from their debut, Gemini. I predict their explosion as a major player in the indie scene very soon.
www.myspace.com/wildnothing

(Wednesday, 10/20, Santos Party House)
Completely worth the very long wait in line outside, The Drums, who were the “surprise guest” of the evening, did not disappoint live. In fact, I think they were the best show I have seen in a long time, which is a lot to say about a 1:15AM show on a Wednesday. They played most of my favorites from their self-titled debut, including “Best Friend,” “Down By The Water,” and of course, “Let’s Go Surfing.” The lead singer, Jonathan Pierce, mixed it up with some funky dancing and some wackier vocal takes on the album songs. Utterly entertaining, and worth the hype.
www.thedrums.com

(Thursday, 10/21, Mercury Lounge)
This was definitely one of my favorite shows, mainly because it just felt so good to be in a small room with a group of people who truly wanted to be there. Vanderslice is charming and worked the room with a disarming smile and a good sense of humor. It was just him on stage with a guitar, but his songs filled the room with a sense of warmth. He opened with my favorite song from Romanian Names, “DIALO,” and continued to play a mix of old favorites (“White Dove”, “Sunken Union Boat”) and even some brand new material. He is doing a split with The Mountain Goats, which sounds like the perfect combination to me! His new studio album is out in January, and if you are interested, check out his website. He often puts up music for free, which is completely generous. As a part of his witty stage banter, he let MySpace have a piece of his mind, which I can definitely appreciate.
www.johnvanderslice.com 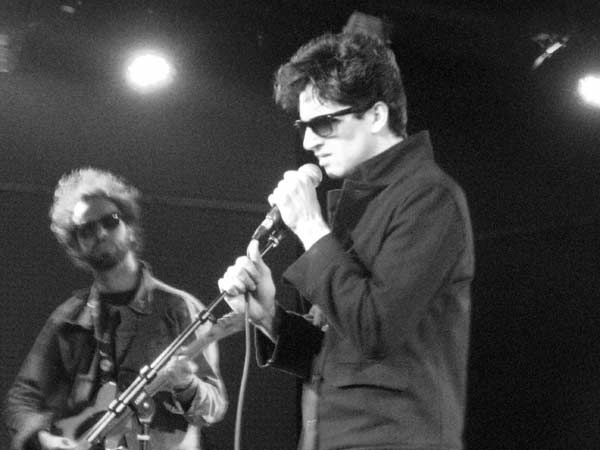 Francis And The Lights

(Saturday, 10/23, Knitting Factory)
We made it just in time to catch the last of many, many CMJ shows that Francis And The Lights played. His soul/funk/jazzy groove was in full force still, despite the major exhaustion I’m sure he was feeling after playing five days straight. His dance moves were actually entrancing, and we really dug his whole sunglasses on/sunglasses off routine. His sound is so unique (a weird mix of Duran Duran ’80s synthpop and ’70s soul). I was pretty sad that he didn’t play (or if he did, we didn’t catch it) his cover of Kanye West’s “Can’t Tell Me Nothing.” But if that was the biggest disappointment of his set, that then ain’t too shabby.
www.francisandthelights.com

To see more of Judy’s photos, check out her blog, here.