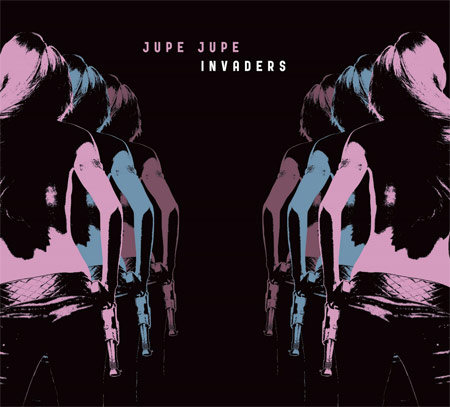 Jupe Jupe’s Invaders is a fun dance album that would appeal to anyone that loves the ’80s and throbbing beats. There’s a very strong ’80s sound, especially in the first half of the album, which has heavy Depeche Mode stylings, including low, moody vocals. The best of these songs is “Something About Love,” which offers a pulsating beat that would get a club rocking in 1982.

In the second half of the album, there are a couple of developments. The most interesting song out of the bunch is “Orbiter,” the only track featuring an acoustic guitar and less stylized vocals. The song does feature some synth bleeps and tweets peeking through, which can feel oddly out of place, but the natural state of the song and vocals are extremely refreshing. A move more in this direction would provide Jupe Jupe with something fresh to offer. “The Grand Drape” starts like the cool, moody “Mad World” cover by Gary Jules, but then it slowly turns into a theatrical Halloween song that is much less appealing.

Some of the album’s beats are fresh and interesting, while others are a little stale and overproduced. However, if you love ’80s new wave, you’ll enjoy Jupe Jupe quite a bit. More focus on the marriage of the acoustic and synthetic sound that “Orbiter” introduces would be encouraged.