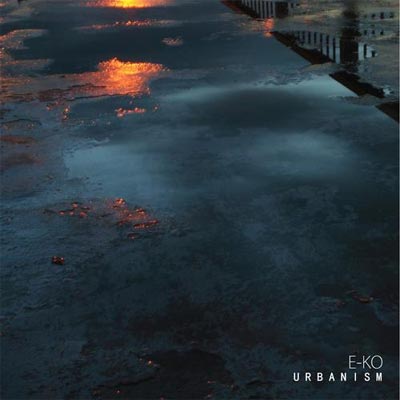 Our entire human existence changed with the realization that, in 2008, more than half of the world’s population could be found living in cities, as opposed to rural areas. Our urban islands, however densely populated, are separated by great lengths of time and distance. Scientists predict one day that humans will be able to travel by high-speed bullet trains over oceans and continents in a matter of hours. These trains will travel through miles of tubes and tunnels, reaching up to several hundred miles per hour along the way, rushing to their destination. Connecting cities with rapid transit brings city dwellers closer together, reinforcing the urban dynamic: the bustling commute, the feeling of isolation among masses of people, and the beauty found in the ordinary, everyday life of others.

E-KO’s full-length album, Urbanism, revisits these ideas while providing hopeful visions of the city of the future. The stories relayed vary in subject matter and focus; Urbanism traverses metropolitan settings, from the hectic morning commute to late night chill out lounges. He accomplishes this by using field recordings from train platforms, re-examining the mundane and portraying it in a new light. His original compositions unite the pulse of M83 with the tension of rush hour on “Shinkansen Part II”. He traverses ambient-techno, IDM, and contemporary classical, balancing melody with melancholy in the same manner as Deru.

While his music wanders into bedroom listening territory, Urbanism is devoid of the clichés of lounge music. Stylistically, the music is grounded mostly in dark shades of IDM not too far from the depths of the n5MD roster. While not as ambitious or progressive as current works, Urbanism dares to summon soulful longing from the ether. Urbanism as an album, and as an idea, may not be revolutionary or original, but E-KO refreshes that dream of skyscrapers and cityscapes, without sounding tired or as though he’s going through the motions. Urbanism evokes metro riders — the ones listening to their headphones on the bus — as much as it serves as the salve to their disenchantment and their loneliness and urges them to keep dreaming.

The album is definitely a must have for road trips, chill out time after snowbaording or just intense after work relaxation. Can’t wait untill e-ko’s next album !