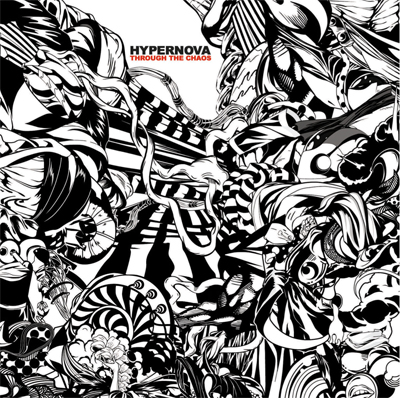 I’ve always felt that the oversaturation of The Killers and The Bravery had signaled the end of newer new wave bands that were coveting bands like Joy Division, The Psychedelic Furs, and The Smiths with great success. But the simultaneous release of new albums from the likes of Cold Cave and Hypernova suggest otherwise.

The latter’s record, Through the Chaos, is song after song of dance floor cuts. Rarely letting up, songs like “Viva La Resistance” and “Fairy Tales” are groovy heavy and insanely catchy. Vocalist Raam does a pretty good job at keeping up with the intensity of the band’s songs.

Like a well-made mix, Through the Chaos doesn’t have any downtime; it’s one of those rare albums that can be played in a single sitting because it is so consistent. Unfortunately, it’s apparent that Hypernova are talented musicians and songwriters, so the lack of deviation from their new wave sound creates the sense that they’re pigeonholing themselves.

Now, I’m not suggesting that they rip off Springsteen for a track, but I’d be interested in hearing what else the band is capable of, musically. After all, not every Morrissey song was depressing or politically charged, so I think holding Hypernova to that standard is pretty fair game.

All in all, Through the Chaos is solid. The songs are enjoyable and it’s easy to get lost in the album, which is one of the finer points of listening to pop music.