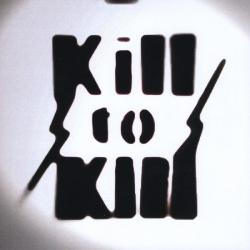 A lot of bands today seem to like going for ironically harsh-sounding names and album titles; punching against the hipster grain is Kill To Kill, whose Fighter EP sounds a lot like a parking lot brawl after a hardcore show.

Forget exploration and experimentation. That shit’s weak. Fighter is raw and dirty, with an angry rrriot girl vibe that echoes a little punkish. Singer Sylvia Izabella’s voice leans toward tone-deafness, but she sings like she’s daring you to criticize her. Counterpointing her wail, the instrumentation is heavy and low, composed of bass and baritone guitars and a bass VI tuned ridiculously low or something. I don’t really know. But it sounds belligerent and seething, especially with the hard-hitting drum patterns.

From, “Hater,” thumping low with barely decipherable lyrics, to “Cliffhanger,” which is really just a variety of, “Hey! You!”‘s sung at different levels of outrage, Fighter is a blend of angsty, girl band punk, with lyrics that tie together like they all came from the same pool of thought and pain.

This EP probably won’t change your life, but it’s something to fill your angry nights with.