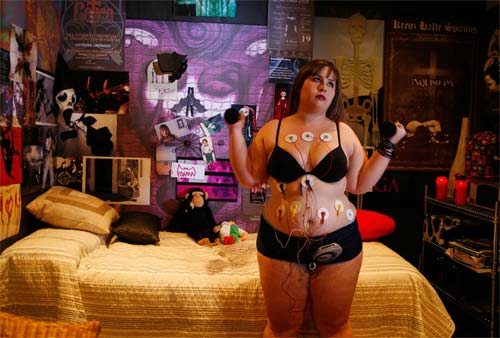 A documentary studying why Proposition 8, the constitional amendment banning gay marriage, passed in California. The primary reason they point to is the Mormon Church’s heavy involvement in the movement to stop gay rights.

Five overweight individuals struggle with images of self in this black comedy, and it doesn’t help that their skinny therapist feels more and more revulsion towards larger individuals as time goes on — especially for his pregnant wife.

The Two Horses Of Genghis Khan

The Two Horses Of Genghis Khan (Chingisiyn Hoyor Zagal) is a documentary film about a Mongolian vocalist, Urna Chahar-Tugchi, who is from a family livestock farmers from Inner Mongolia. She promises to repair her grandmother’s violin and find the song inscribed on the violin’s neck — one which originated in the Middle Ages and is utilizes a specific singing technique which makes it possible to sing on horseback for hours.

Robogeisha is an outlandish film where cyborg geishas fire machine guns out of their hands and chop off heads with blades emerging from leg warmers. Directed by Noboru Iguchi, creator of Tokyo Gore Police, RoboGeisha is meant to be ridiculous, and it revels in it.

A village falls sick due to pollution from a local mine, and its superstitious residents turn their rage on local doctors. It’s a study between old beliefs versus new ones, and how they connect in our world today.

Hugh Hefner is known as an old man with Playboy girlfriends, but who is he really? This documentary explores his life and how he has influenced female rights and legislature such as Roe v. Wade.

A stylish drama set in Nazi-occupied Prague, which explores the fragility of relationships by means of bright, minimalistic visuals.

Set in 1950s Moscow, Hipsters shows how musicians can break free in the midst of Soviet conformity. A love it or hate it musical some will swoon over and others will abhor.

Brotherhood explores how homosexuality changes when placed under the weight of society. Lars and Jimmy meet when training together in a neo-Nazi group and soon find themselves feeling deeply passionate about one another. The atmosphere of intolerance forces them to keep their relationship under wraps.

I Kissed A Vampire

It’s a vampire musical. That’s all you need to know, really. If you like guys who look like Adam Lambert, this is the boat for you.

Go along with Conrad Anker as he recreates the journey of Geroge Mallory, a man who died upon scaling Mt. Everest in 1924. Using the same equipment and clothing as Mallory, Anker finds just how difficult it really is, and why Mallory departed with the words, “We shall go, and if it is a one-way ticket, so be it.”

The debut full-length film of The Mars Volta’s Omar Rodriguez-Lopez, The Sentimental Engine Slayer is a grimy look into the life of Barlam (played by Rodriguez-Lopez himself), who seems to be spiraling out control. The film is loaded with bright colors and iconography, and a killer soundtrack one would of course expect.

The newest film by Delicatessen screenwriter and director Jean-Pierre Jeunet, Micmacs is a surreal dark comedy where a homeless and jobless Bazil finds himself associating with a whole slew of eccentric characters.

A documentary that looks at the creation of artificial intelligence and where the future of it might lead us.