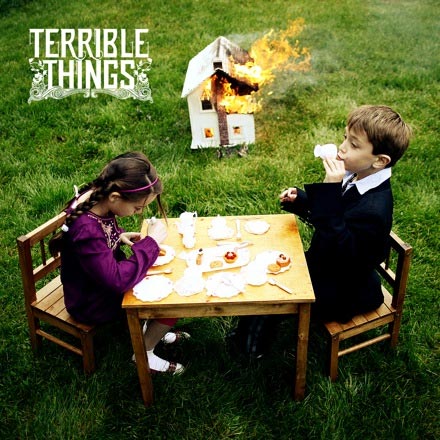 When Fred Mascherino left Taking Back Sunday, many people thought he’d played himself. Then he released The Color Fred and doubts were thrown to the wayside. For his new project, Terrible Things, Mascherino has been joined by Hot Rod Circuit frontman, Andy Jackson, and former Coheed And Cambria drummer, Josh Eppard. Anyone who’s been familiar with Mascherino’s pre-TBS work with Breaking Pangaea knows that the man can write a hook and enhance the tunes with complicated structures.

Read about the album cover artwork

In the Terrible Things self-titled debut, the best parts of both Mascherino and Jackson’s work have come into fruition. A concept album based on a series of arsons that occurred in Mascherino’s hometown of Coatesville, PA, Terrible Things is by and large an uptempo number. The lead single, “Revolution,” is easily one of the most catchiest songs of the year. “Conspiracy” is something of a head=scratcher with its staccato lead piano and pounding drums. “Wrap Me Up” has Jackson on lead vocals and is one of those songs that could have a place on an indie rock playlist or a Top 40 radio station.

The trio is comprised of very accomplished individual songwriters, and Terrible Things is varied and interesting enough to appeal to the fans of their previous bands, particularly for Jackson and Mascherino, whose bands could have easily performed the songs that appear on this stellar debut.

With its complex story and equally dramatic lyrical narrative, Terrible Things’ self-titled album is easily digestible and one of the more intelligent records out there. In the end, these things aren’t so terrible after all.