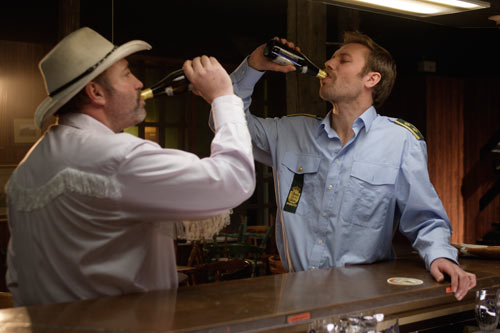 Terribly Happy opens with an outrageous narrative the film claims is based off of true events. In a small town, farmers discover that their cows are sinking into the grass fields, because the fields are really part bog. One cow gets stuck in the boggy field and is eventually dug out. Once it is, though, it gives birth to a calf that is half-human and half-bovine, and all of the women in the town become greatly distressed. The cow has to once again be sunk into the bog for the mental sanity of the people in town. Ridiculous!

Through the years, I’ve taken quite a liking to the black comedies exported by Scandinavian countries. Not quite in line with typical American humor, Scandinavian black comedies are funny in a dry, cynical, and wholly fantastical way; they often revolve around scenarios that are so absurd they become surreal. Terribly Happy begins in just such a fashion, with just such an influence. It perfectly sets the tone for a film that will sink deeper and deeper into crazy comedic scenarios, only… that’s not what happens.

Terribly Happy soon starts to hum to a vastly different tune. Comedy goes out the window, and it becomes a mixed and mashed amalgam of psychological thriller, action, noir, and western. In fact, asides from the beginning and end of the film — which are steeply entrenched in “black comedy” territory — Terribly Happy is quite serious, with slight moments of amusement in the, “this-is-funny-but-not-in-a-laugh-out-loud” variety.

The film follows around city detective Robert Hansen (Jakob Cedergren), who is transplanted temporarily into a small town. He is quite obviously out of place, and one learns early on that he has no one but a wife and kid who do not wish to speak to him. He is, for all intents and purposes, alone. And while we do know his on-screen character to a degree,we soon learn that we don’t really know anything about him other than the fact that he is a man who yearns to do his job as police chief.

As the bizarre inconsistencies of a small town replete with strange rituals emerges, one begins to question who is correctly pointing the fingers and who is behind the mysterious murders and disappearances that take place in the town. Is it the entire town? Is it the film’s ultimate wife-beating villain, Jørgen? Is it Robert? It’s hard to decide, because Terribly Happy is terribly hard to predict. Somehow, the film manages to bend genres and expectations without becoming overly complicated or feeling cluttered in any way.