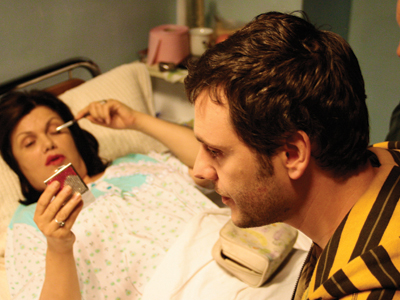 Best Intentions has been dubbed part of the categorical oeuvre “Romanian New Wave.” The movie is about the hospitalization of a woman and the coping of her family and friends. I walked a half-hour late into the screening and felt like I didn’t miss anything. The story is formal and very straight-forward; the son cannot overcome his anxiety over his mother’s health, even as she is about to be discharged. But it’s the imaging of story which counts in this film.

There are broad stylistics which qualify “Romanian New Wave,” most of which pertain to camerawork and condensed, isolated events — seemly ‘ordinary’ — which are narrative vessels for the camerawork. It can be a very effective approach showing an almost profound “slice of life’. But the attempt at import and interest fails in this movie, mainly because the characters aren’t that interesting and the scenario of the chance, non-critical hospital admittance doesn’t develop into a captivating story.

In lieu of Best Intentions, I recommend googling “Romanian New Wave” and choosing from Wikipedia’s listed titles. That is, if a phrase like ‘new wave’ generates any affinity at all, either historic, aesthetic, or just plain curious.