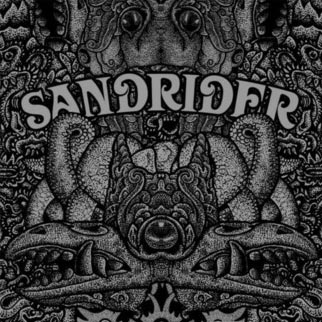 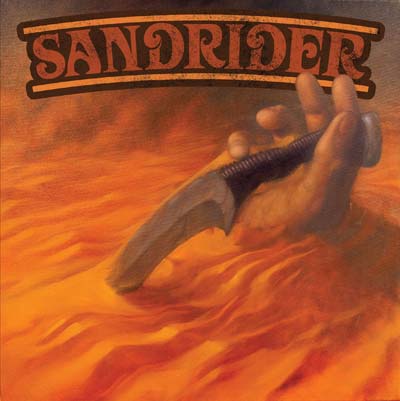 Theoretically, if beings existing outside of three-dimensional timespace looked down upon the lower dimensions they’d created, micro-entities such as humans might appear to them as little more than a blur — misunderstood pulses of flickering electricity constantly cycling through ephemeral life-spans. But the “God being” would perceive the mountains, trees, and canyons as solidified objects existing in cyclical, slower parameters more familial to its natural timeless state. It would also conceive the long-term progression of these cosmic colossi in eons — in speculative forms of consciousness we can’t even begin to fathom. But we must try.

We, as microscopic thoughtforms, must beckon the macro-consciousness with a mighty wail. We must conjure forth riffs robust enough to echo throughout eternity with their supreme beauty and inherent majesty. We’ll need heroes. This isn’t a path for the faint of heart and corruptible of spirit. Send forth Seattle’s heavy rock royalty. Done. Sandrider is a super group of sorts, forged from local hardcore stoners (and I mean that in musical style not lifestyle preference per se; they play hardcore-influenced stoner metal) Akimbo — and one of my all time favorite Seattle bands, still semi-active neo-spiritual art rock institution, The Ruby Doe. Basically, it’s Akimbo with Jon Weisnewski playing guitar instead of bass, and rather Jesse Roberts from The Doe holding it down on that end. The result is a monolithic expanse of expertly-crafted riffitude which echoes throughout the cosmos and up towards the immortal heavens. And what conspicuous fates do the waning moons bring? Yeah, this might not have ever seen the light of day if not for the efforts of local hard rock fanboy Nik Christofferson, AKA Seattle Rock Guy, and his recently launched Good To Die Records.

Now, when the transcendent faeries peer into the primitive realm of man, they’ll see how we got robbed by the referees in Superbowl XL and how our mighty Supersonics were sold out of town by a douche-a-tron coffee magnate. They’ll know, and they’ll know the only way to combat such injustices is by unleashing a hyper potent blend of hyper perfect riffage on the multiverse. In a way, I actually dig this a bit more than anything I’ve ever heard by the mighty Akimbo. On their finer moments, Sandrider remind me of a more focused Baroness. They’re that cool. The vocals from both Wisneiwski and Roberts definitely pulse rhythmically, more akin to The Doe than they harsh your mellow, Akimbo style. One can only hope those on high can now see the larger reverberating presence conjured forth from this megalithic congruence of talent and compel them to reach even higher.