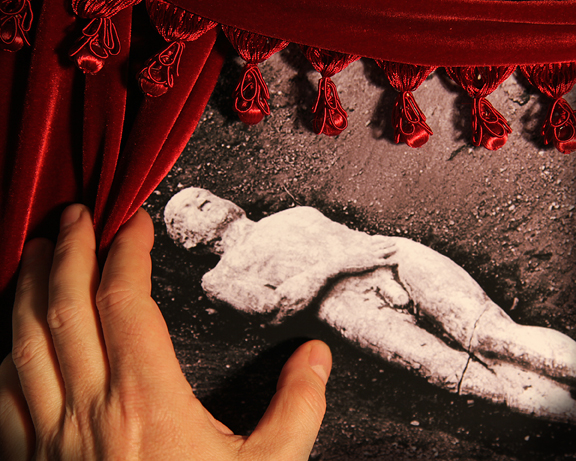 The story of the Cardiff Giant, a colossal “petrified man” unearthed from a fake archeological site in upstate New York in 1869, is a phenomenal object lesson for cultural production, and David Eckard’s ©ardiff performance makes the most of that potential. Rolling up on intentional and incidental audiences around town this week, Eckard uses this theme to expound on the value of wonder and mythmaking from a magnificently crafted traveling podium/snake-oil wagon/museum-quality display case for a (genuine?) Historical Artifact of Mystery!

Storytelling can be a tough sell to art audiences; notwithstanding the idolatry that Ira Glass is met with in any liberal intellectual enclave, sophisticated people who have been steeped in irony and postmodern detachment shrink from anything that resembles “reenactment,” as if Mickey Mouse had come up to them at Disneyworld and tried to hug them with sweaty, fake-furry mouse arms in sweltering Orlando heat. Actually, they love Mickey Mouse, because he is ironic, but history as a lived experience is something they cannot countenance. Eckard is no Ben Franklin impersonator, bellowing historical dialogue in the first person at disaffected high school field trips to Historic Philadelphia, but the specter of cheesiness lurks; the artist is aware of it, and it makes him strangely vulnerable and likeable.

On Thursday night, the TBA opening crowd at Washington High School was in full effect. The giant bouncy castle throbbed gently against the night sky, and every art hipster in Portland was crowded into the beer garden, yelling and checking each other out. David Eckard set up shop in an ill-lit part of the field, near enough to the beer garden to be dimly perceived through the hurricane fencing, and to be almost inaudible over the din of frenzied networking. He was not miced, nor did he use one of the outlandish, oversized megaphones that feature prominently in his earlier work. This was apparently an intentional choice to make his audience come closer and hang upon his lips, but it was a risky move for a rather unpolished, unprojecting and manifestly nervous performer. His get-up was outstanding (the man has build skills like whoa), but it was touch-and-go for a while whether he could channel the magnetic bravado and bluster of P. T. Barnum and the other hucksters involved in his tale, as he lost his place in the script several times and shuffled papers and props around to disguise his confusion.

Soon, however, the momentum of the story took over, and his somewhat amphibious approach to the narrative (neither immersed nor removed, alternately brash and bashful) became more endearing than embarrassing. It also didn’t hurt that there was a mystery box (or rather, a series of inset mystery boxes, which unfolded as the plot thickened) built into the podium — a trick that he openly acknowledged as a lure to bolster his somewhat lackluster oratory skills. His monologue was peppered with similar admissions, reveals and anachronisms, but he was genuinely and rightly fascinated with his subject, and teased out a lot of interesting conclusions about the role of evidence, display, media, intellectual property and popular imagination in creating art and other sensational hoaxes. He revealed that an ancestor of his was a master cabinetmaker who built the stage for P. T. Barnum’s replica of the fake giant, implicitly linking his own box-building practice with a family history of turning bits of grit into pearls, oyster-style. This deeply personal touch accompanied the emergence of the artifact, and though his concluding remarks veered a little cheesy again (the beauty of wonder and fiction, etc.), the work as a whole was compelling, courageous, and certainly food for thought.

My parting thought as I left the scene was whether his artifact and ancestral connection were indeed genuine, or in fact a third (fourth? I lost count) inset fiction; it would be a truly masterful piece of theater if he had led us all by the nose to a thing he had made up out of whole cloth. I would doubt it, however; the reflexive insecurity of the post-modern creative makes the outright, bald-faced lies of their similarly bewhiskered predecessors an impressive, impossible dream. And today’s audiences are too smart to be taken in by a chunk of gypsum… right?

TBA Festival 2011: zoe | juniper – A Crack In Everything Performance Review