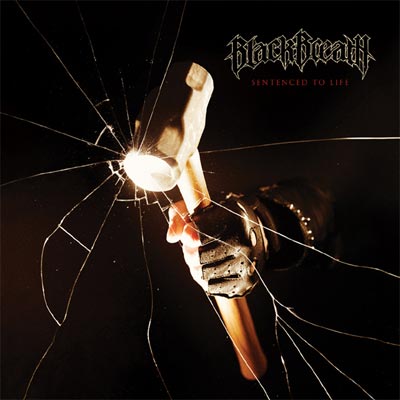 Peter Woodburn1 min readApril 6, 2012Add comment
You have five seconds to prepare yourself on Black Breath’s newest release, Sentenced to Life. That five seconds of preparation has to be enough, because after the guitars and drums finish fading in on the opening track, “Feast of the Damned,” your neck muscles are forced into a blistering half-hour of pure, unrelenting, flawless headbanging. Halfway through “Feast of the Damned,” as the guitar hooks come in, their slight solos, the death beats of the drums, and the gang vocals take hold until you find yourself subconsciously turning up the volume to unhealthy evil levels.

The Seattle quintet specializes in the brand of music blessed by the dark lord. The reason Sentenced to Life works so well for Black Breath is that it doesn’t go off the deep end like so many metal albums do nowadays. Black Breath aren’t trying to do anything else but serve up a concise, absolutely brutal album brought with guitars served up like chainsaws, bass lines served up like fallen trees, drums on a gallon of gasoline, and vocals fueling the whole god-be-damned forest fire of their sound.

Not a whole lot has changed in their sound since their first release, Heavy Breathing, and that is why Black Breath busts through their sophomore slump such grand fashion. They’ve taken everything great about their previous effort and tightened the screws just a tad bit more. Sentenced to Life clocks in at just a shade over a half hour and you’ll be licking your chops wishing for more, because that half hour contains some of the most efficient metal that has been put out in a long time. Black Breath are wearing their influences on their sleeves in blast beats and riff after riff of delicious riffitude. This album is all bloody hunks of meat — no fat, no extras to be trimmed off. Songs like “Endless Corpse” showcase some brief bits of thrash, but they don’t overpower the hardcore roots that much of Black Breath’s persona stems from. The two genres mosh violently together in perfect ordered chaos.

If you like metal this isn’t necessarily the album you’ve been waiting for, but deep down inside, it kind of is. Black Breath have served up such a no-frills, no-bullshit album with Sentenced to Life that you can’t help but be impressed. Too often metal ends up being a caricature of itself, and Black Breath clearly don’t give a shit. They are borderline belligerent about how obvious they serve up the brutality, and it’s clear in the end that all the band is concerned about is giving those long and glorious locks of hair a good workout.