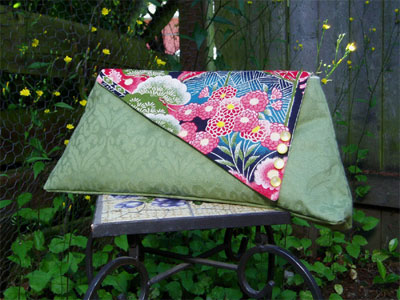 For a long time now, the Crocodile Cafe’s I Heart Rummage event has drawn in consumer-hungry Seattlites who are interested in buying products that are a little off-kilter and less commercial than what they’d find in the mall or at any shopping center. Now, say hello to Seattle’s newest craft extravaganza, Urban Craft Uprising, which just so happens to be taking over the I Heart Rummage project. Their first event was held in November 2005, and was much more successful than the founders had ever imagined it would be. Showcasing 50 designers from around the Pacific Northwest and beyond, Urban Craft Uprising attracted 4,000 individuals who were looking for something new to purchase. In the months to come, keep your eyes peeled for the Urban Craft Uprising founders and supporters. They’re sure to be everywhere in the Seattle craft scene.

ADORNED
Ashley Baker is an indie designer for her handmade company, Adorned. She’s been crafting for years and is proud to be a member of the DIY movement. She makes knitted and sewn lovelies of all shapes and sizes. She currently sells her goods at Velouria boutique in Ballard. She lives in Seattle with her sweetie Sam and her two fat kitties. (www.be-adorn.com)

CRAZY COCONUT
Amy Rosko and Mike Estes create one-of-a-kind images for their hand-printed clothing. The images are graphics that are manipulated from their original photographs. From t-shirts and dresses to tote bags and skirts, they utilize ‘recycled’ and vintage fabrics as well as new tees, hoodies, and golf shirts. Their product line takes a transformative look at the world, fusing photography and screen printing into wearable art. (www.crazycoconut.net)

STICKY WICKET CRAFTS
A Seattle native, Nikola has been craft-obsessed since she was old enough to weave a potholder. Nikola decided to start designing her own craft kits with the creation of Sticky Wicket Crafts. She also sells made crafty items and teaches classes in needle felting. When not crafting, Nikola is gardening, spending time with her partner and two daughters (ages 2 and 3), and trying to convert the world to biodiesel. (www.stickywicketcrafts.com)

FUZZY HALO
Marisa heads up the public relations efforts for Urban Craft Uprising and is currently looking for a full time gig to pay the bills. She is also the creator and designer for fuzzyhalo.com. Marisa has lived in the Seattle area for a handful of years and enjoys the indie, crafty, artsy feel of the area. Her interests include jewelry design, note card design, photography, philanthropy work, and local indie rock concerts. (www.fuzzyhalo.com)

DEVOUT DOLLS
Sewing is Sara Lanzillotta’s art form. Using traditional forms of sewing and dollmaking, Sara uses the cute and approachable forms of dolls and mixes them with confusing and sometimes disturbing subjects to combine the sweet with the scary. She is inspired and influenced by people and things such as freak shows, medical anomalies, religious artifacts, Mark Ryden, Junko Mizuno, John John Jesse, Edward Gorey, animals, and vintage fashion. Her work can be found in local shops such as Vain, Blue Bottle, Gargoyles, Pop Tots, Plastic Passion, and Lipstick Traces. (www.devoutdolls.com)

THE BATHERY
Cassandra Lanning is the proprietor of The Bathery, a one woman craft affair that is trying to create a sense of mystery and intrigue in a world of predictable, unoriginal bath products. She enjoys soapmaking, old world crafts, ancient history, aromatherapy, all things Euro, cooking, crocheting, and needle felting. In her free, time she works as an electrologist, battles her husband-the-brewer’s ever-growing brewery in the garage, and enjoys a good bottle of vintage port. (www.thebathery.com)

EMPIRE WASTE DESIGNS
Markia is a life-long crafter whose first DIY crafts were scotch tape stickers she colored and sold to her first grade class. An appreciation of functional art and a background in theatre inspired her to develop her art into something more useful. She is now co-owner of collage on clothes company, Empire Waste Designs, and lives in Ashland, Oregon with her sweetheart and extended family. In her free time, she plays the bass, rearranges her toy robots, and attempts to subvert The Man through dissenting collage. (www.empirewastedesigns.com)