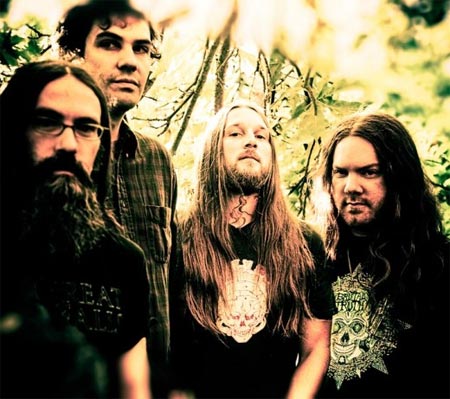 “Anything that makes people focus more on learning to play their instruments is cool with me.” — Daniel La Rochelle

In some circles, Lesbian’s debut full-length album, Power Hor, is the must have metal album of the year. Since I’m sure the majority of our readership has no idea what I’m talking about on this front, I’ll give a little bit of back story. Lesbian is somewhat of a Seattle-based metal super group, comprised of members from spazz core legends the Abodox and the now defunct Golgothan Sunrise. They’ve been playing high profile shows around the city for the last few years without any kind of recorded output to speak of, so there were more than a few people in these parts jonesing for a proper monument to their already established psychoactive excellence. I was one of those eager heads, running to Silver Platters after work the very day it dropped to pick up a copy. Apparently, I wasn’t the only one with this idea, because there was exactly one copy left. I promptly snatched it up, taking note of the marketing sticker affixed to the cover boldly proclaiming them as “the next wave of American psychedelic metal.”

Seemed like and appropriate enough assessment. The first time I saw these guys was at least two years prior. They smoked a shit load of pot before plowing through a half hours worth of ambient sludge. On this particular evening, they’d turned the performance into a multimedia event, playing in front of self-made visuals which turned out to be a home made video tape oscillating between seventies lesbian porn and pro wrestling. In short, it was brilliant. The whole thing made perfect sense, although the tunes were a tad on the unpolished side at that point. Over the next few years, I’ve been fortunate enough to catch them on at least another handful of occasions and each time they’ve gotten exponentially more effective at projecting a good contact high.

When I conceptualize the meaning of a phrase like “the next wave of psychedelic metal” bands like ISIS, Red Sparowes, Neurosis, and their various clones immediately come to mind. I’ve always had mixed feelings about these bands. On one hand, it’s pretty spacey stuff which typically I’m a fan of, and yet, it can also strike me as fairly lazy at times. It’s all hit or miss, although I’m kind of warming up to it more and more with time. Early on, I wondered if Lesbian might tread further in that direction, and I was thankful to find that they eventually mutated into something much different and more complex.

I was supposed to catch up with the band to chat about their debut album, new record label (Holy Mountain), and recent west coast tour at a CD listening party held at the Tin Hat in Ballard a few days after its release. Instead, I was rendered bed ridden by one of the worst colds I’ve ever had to contend with. Obviously, I had to reschedule. There was only one acceptable course of action at this point. I left work early, took some bong rips, threw on their album then sucked down a quick shot and a half of Nyquil. As I wandered between worlds, their music loomed in the background of my psyche, whisking me through sprawling vistas of subtle exorbitant bliss. The next day, I was still mercilessly afflicted by what was being widely referred to as the crud. That night I repeated the same ritual, except this time, I replaced their disc with Pink Floyd’s Animals. Same kind of effect, essentially. The next day, it occurred to me that Power Hor is almost more of a psychedelic tour de force than a metal record.

When I finally recovered and managed to catch up with them at their Belltown practice space, I started the conversation off by inquiring as to what was currently inspiring them sonically. The answer pretty much across the board was “psychedelic music.” They expressed their love for classic bands like Can and Tokyo’s progged out psych peddlers Green Milk From the Planet Orange. On the metal spectrum there seemed to be mutual appreciation for the immortal Gorguts.

When prodded about being a prog band, they didn’t for a second shy away from the tag, which I imagine you’d have to learn to get comfortable with when releasing an album full of twenty-minute cuts. “Anything that makes people focus more on learning to play their instruments is cool with me,” commented rhythm guitarist Daniel La Rochelle.

“I get inspiration from everywhere,” added lead guitarist Arran McInnis, who further revealed an appreciation for such disparate influences as classical music and Rush.

As I was leaving to catch my bus I thought about how my cough syrup induced hallucinations had pointed me somewhat in the right direction. With its sweeping mellow passages and backwards masked weirdness, Power Hor has enough finesse and ethereal wit to please the bleary eyed stoner in all of us while simultaneously retaining dangerous levels of metal chopitude. In short, it’s exactly what ISIS isn’t doing, and thank god for that. You can probably see these guys playing around town for like, five bucks, and you should.