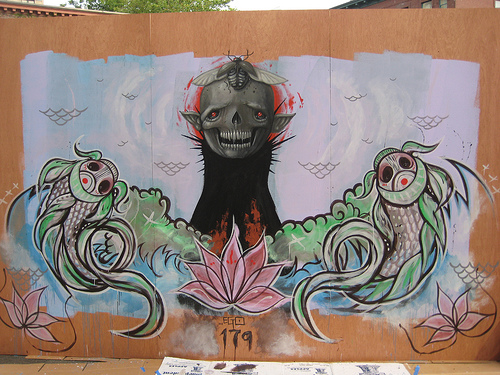 Artoleptic threw its first event last year, in the parking lot adjacent to the 619 Building and the Snowboard Connection. Some decent art pieces were created, but the sense of community was lacking, partially due to the fact that the event was barely publicized.

Earlier this month was year two of the Artoleptic urban arts and music festival. The non-profit rented out the same space but gave out free booth space to artists, got sponsored by Glaceau, enlisted the participation of many more mural artists, chose a much more diverse selection of music, and brought on Skate Like A Girl for girl skate workshops.

Here were some of the highlights from the event: Ten Hundred, who was covered in the Spring 2008 Issue of REDEFINE, gives away free drawings at his well-stocked, colorful booth.