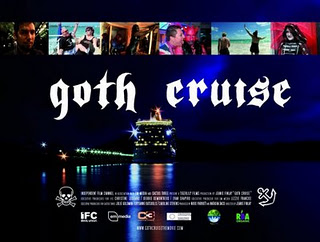 My first, and probably only, cruise experience was two months ago. It sailed through the Northern European Baltic Sea countries, like Norway, Sweden, Poland, and Russia, and it epitomized all that I hate about traveling: gluttony, closemindedness, and lack of desire to really get to know other countries. To make it worse, I was one of less than a dozen people under 40 on the entire cruise (workers not included, of course). It was a harrowing experience in where I thought I was the only one like me on the entire ship. No one seemed to share my interest. I wanted off.

Apparently, Angel Sil, Goth Cruise founder, felt just like I did. She and other goths wanted the luxuries of going on cruises but didn’t want to feel singled out. They didn’t want to be the only ones with piercings, black clothes, or dyed hair, in a setting crammed with strangers they could not escape from.

2007 was the 4th annual Goth Cruise, in which 150 goths boarded a cruise from New Jersey to Bermuda and shared the cruising experience with 2,500 “norm” individuals. Goth Cruise documents this experience, following separate individuals on the cruise, such as “The Veteran Goth,” a 50 year old dad of two and “The Secret Vamp,” a six and a half foot tall crossdressing man.

Goth Cruise covers interesting subject matter, but it seems shortsighted at times. It essentially breaks “goth” down into two very simplistic factors: fashion and music. Although possibly true to a degree, the idea stands in stark contrast with the numerous testimonials about how goths form one of the most diverse and accepting subcultures. Pigeonholing what it is to be goth into just fashion and music places is limiting and stifling.

The film takes jaunts all over the Gothic world, from the famous store Trash and Vaudeville in New York to the Whitney Goth Weekend in the United Kingdom. It seems to cover all things loosely related to goth for an overarching view, but to my dismay, the view of what it means goth is largely aesthetic in this film. It is only 3/4 into the film that the film really delves into something deeper than aesthetics, and, for instance, gets into how being goth affects the life of a goth in the workplace.

But any goth documentary can talk about these things. For a documentary about Goth Gruise, what I wanted to see was what life on the actual cruise was like. I really wanted to see how other cruise patrons interacted with the gothic cruise patrons. I wanted to see the opinions of elderly individuals who probably had never met a goth person in their life. Gothic Cruise was nearly completely lacking in this regard. They focused on the Gothic cruisegoers alone, with no more but a couple short snippets of misjudgments cruisegoers had about goths.

Goth Cruise is for those who are in fact interested in all things about the goth subculture. It won’t necessarily teach you anything new, but you will get an intimate look on a small subsection of the goth population.