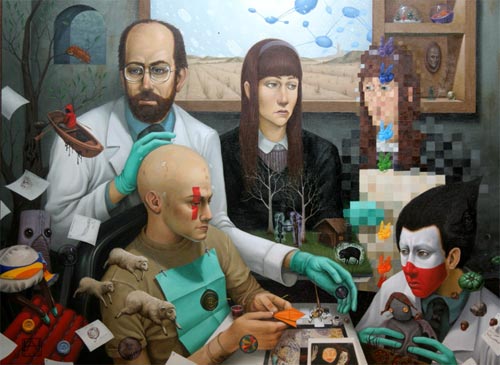 Coming in three days is a show in Escondido, California, that features the works of three technically proficient artists all bonded by an unconventional, twisted flair. Here’s what you can expect in Distinction Gallery‘s upcoming show. First, there’s Scott Brooks. His warm-colored works feature warped characters who walk the fine line between human and alien. Brooks plays on this ambiguity and feeds the visual palate of folks who might like slightly bizarre things along the lines of William S. Burrough’s Naked Lunch. There’s something engaging and interesting about Brooks’ way of throwing the head of a man upon the torso of a chicken in The Last Humpty Dance and his way of putting disgusting items like human organs into a bright menagerie of organs in Renaissance Man (shown below). Andy Haynes was previously featured in REDEFINE with his slightly surreal character paintings. His newest pieces have headed in a different and similarly exciting direction. In One Hour of Awareness (below), a hodge-podge of items float across the painting, creating a sci-fi environment of weightlessness and a feeling of a hyperreality. This piece and others are set in nearly futuristic states, but others fall back on humanity’s more tribal, natural roots, creating an interesting dichotomy between two polarized periods views on human existence. The last artist in this mix is Marie Barr, who, compared to Haynes and Brooks, has arguably more grounded works. It’s a quality that makes her works accessible to individuals of all ages. In addition, whereas the other two primarily use oil on canvas, Barr’s works use watercolors, inks, pastels, and other soft, enveloping mediums, including teas. The results are highly stylized character studies imposed on textured backgrounds, as seen in Things Learned Young (below).