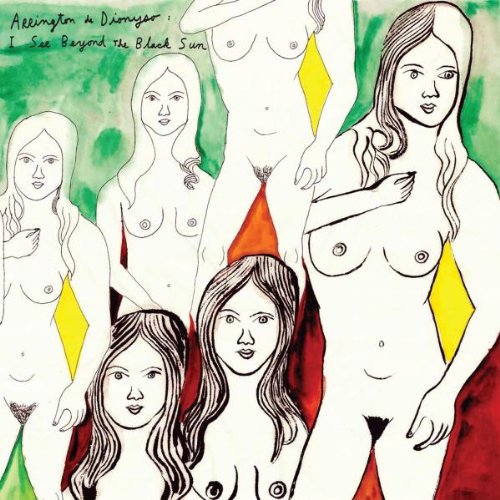 I See Beyond The Black Sun is one of those good news/bad news scenarios. The good news is that someone at the K Records office has been coming into some top notch micro dot acid. Unfortunately, that’s also the bad news, as it lead them to release this minimalist album of alternating didgeridoo and skronking baritone sax drone. I kept expecting something else to happen in the few listens I’ve managed to give this one, but other than a subtle backbeat entering the equation near the end, that’s it. Didgeridoo drone for ten minutes, skronking sax for ten minutes, and then back to the didgeridoo.

In all actuality, it’s probably some kind of homemade instrument that makes both skronking sax and didgeridoo type sounds, but whatever. Now, if you’re into weird music, like you know I am, this isn’t necessarily a bad thing. I have it on while I’m writing this, and it’s kind of making me think that I’m in the movie Naked Lunch, and my typewriter is a talking reptilian mutant that dispenses three kinds of intoxicating fluid from its protruding head tentacles. But that’s just me. Would I say I recommend this to anyone that doesn’t share that particular fantasy? Not really.

who the fuck are you? Did you even read the liner notes? There is no dijeridoo or saxophone on this record- it’s Arrington’s bass clarinet, voice, and homemade instruments combined. I will admit, it is probably something you need to see live to really understand, but when you realize what he is using to get those sounds, anybody would be impressed. This is guy is a fucking genius, and if you say you “are into weird music” I don’t understand why you are giving it such a lame review.

Someone commented on my review. Crazy. Ummmm, maybe you missed this: it’s probably some kind of homemade instrument that makes both skronking sax and didgeridoo type sounds.

See, I didn’t have to read the liner notes. I was right. And if you’ll notice it’s a B- which isn’t a particularly bad review. Would I recommend this to anyone? No! Why? Because they’d be like, why the fuck did you recommend a CD of what sounds like didgeridoo and sax drone, and I’d be like: I have no idea.

but it even doesn’t sound like a didgeridoo!
pick up some throat singing cd’s (huun huur tuu for instance) and you’ll hear where he comes from and where he picked up inspiration for his vocals

so this review was meant to be mildly positive(b-)??? i interpreted it differently.

i really like the thing he’s doing on this work. i even don’t find it impenetrable or difficult. no, no drugs involved 🙂

if you listen to the record and saw his performance of the song you could see that he plays it like a piece, not as free form as you would like to think. i still have a piece of grass he played on….

Why don’t you ask me why I sang the entire album in Indonesian? Didnt you read the press release that came with the promo copy of the record?

Apologies, Arrington… we actually had edits for this album review that explained that particular point, but they hadn’t been posted yet. Sorry.

Arrington: I like the record. I call bullshit on the editors note. Vivian and I actually discussed this, and so I went back and looked. Whereas the press release says you recorded the album to impress a woman, it does not specify that you sang in Indonesian to impress said woman. It even says and I’m quoting: “The entire album is sung in Indonesian: What the fuck?” Keep up the good work my man.