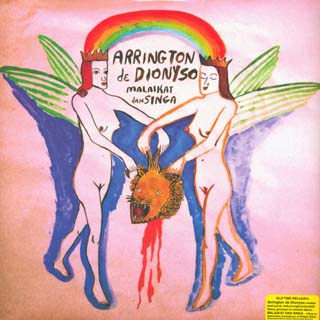 This is the second Arrington de Dionyso disc I’ve been given to review for Redefine, and fortunately for me, the quality seems to be improving. Whereas 2008’s I See Beyond The Black Sun was intriguingly odd, I also found its endlessly meandering bass clarinet and throat singing drone to be somewhat boring — which is the exact opposite of what outsider music should be striving for, in my opinion.

Enter Malaikat Dan Singa, and the boredom is no more. The disc features what could be considered actual songs rather than coming across like a monolithic endurance test, and to call it batshit insane would be an understatement. All of the tracks are sung in Indonesian for reasons unknown, and a lot of it strikes me as sounding kind of like the traditional Yiddish music you’d hear sung at a Bar Mitzvah on crack (not that I have any idea what that would sound like exactly). It’s de Dionyso’s bizarro enthusiasm that carries the majority of this. As he flits from genres as disparate as punk and indie rock to his typical bass clarinet/throat singing weirdness, he always comes back to the chemically-imbalanced Indonesian vocal psychosis. Dude cites a lot of traditional religious musicology from around the world as a huge influence, and he certainly does a good job of sounding possessed by a divine madness of sorts. The kind by which you’re not really sure whether to be impressed or throw him a quarter, saying, “Awwwww, the poor man; he thinks that trash can is a puppy.”

In a way, that would be my only knock on what de Dionyso is doing. It can come off as a bit weird solely for the sake of being weird at times. Like, why would you sing an entire album in Indonesian when you’re a white guy from the Pacific Northwest? Well, because it’s weird. Same thing with the throat singing and bass clarinet. If truly transcendent is what he was going for (and he does cite shamanism as a huge inspiration), then why wouldn’t you just use effects pedals, samplers (which can sound like any fucking thing you want them to), and keyboards like most people in the year 2009 do? That shit sounds awesome. In fact, the moments where he adds an extra layer of oscillating delay pedal mindfuckery to the already eclectic stew are ones where this album shines the brightest.

(Editor’s note: Since posting this review, some subsequent research was done to address the point of the album being sung in Indonesian. It was discovered that the album was sung in Indonesian as a testament of love — to impress a woman. I think this leaves it a little more open to interpretation as to the validity of singing in Indonesian. Nonetheless, this writer maintains that his opinion remains the same, and while he enjoys the album, still finds it sometimes weird for the sake of being weird.)

Why don’t you ask me why I sang the entire album in Indonesian? Didn’t you read the press release that came with the promo copy of the record?

Apologies, Arrington… we actually had edits for this album review that explained that particular point, but they hadn’t been posted yet. Sorry.

Arrington: I like the record. I call bullshit on the editors note. Vivian and I actually discussed this, and so I went back and looked. Whereas the press release says you recorded the album to impress a woman, it does not specify that you sang in Indonesian to impress said woman. It even says and I’m quoting: “The entire album is sung in Indonesian: What the fuck?” Keep up the good work my man.