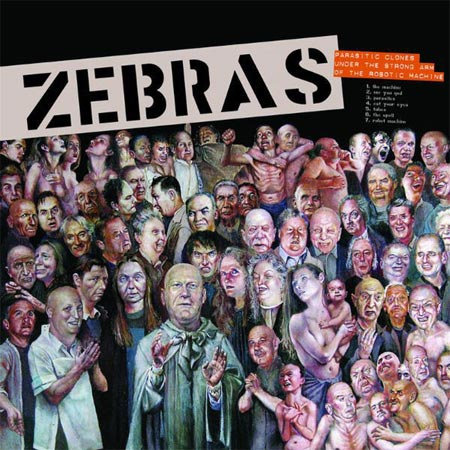 Madison, Wisconsin’s Zebras play a peppy brand of chops-heavy sci-fi/dance punk, which I found myself enjoying thoroughly but ultimately not really connecting with entirely. There are some good ideas going on here, mainly in the form of keyboards and instrumental proficiency. These guys can obviously play, so I found myself oft wondering why they were for some reason playing punkish stuff, which is typically intentionally devoid of musicianship.

All of these songs are good enough and have a cool outer spacey vibe, but this is only an EP, and if I had to wager a complaint, lack of diversity would be it. In fact, the 56-second parasitic intro, which is kind of a truncated electro doom number, hints at a potential that’s never really lived up to on this initial outing. All of the vocals sound exactly the same, which made me think of them as kind of a modern day Bikini Kill, but then I realized that at least half of them were sung by a dude. Odd, to say the least. Dude sings like a lady, I suppose. But the vocals are largely irrelevant.

As you’re reading this, Zebras are working on their full-length debut, and if they can manage to diversify their sound to include a lot of decidedly non-punk-sounding cuts, I’m sure it will be quite brilliant.