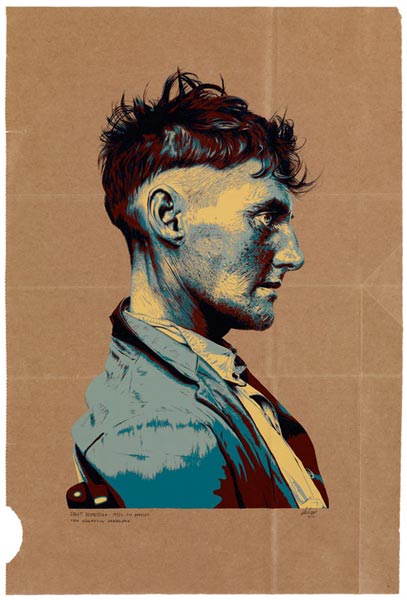 “I can’t really explain why it is that I focus my art on such deviant topics, other than maybe that they are such a draw [because they are] the deviancy that appeals as a dark side to our civilized side.”

Portrait art is no longer what it used to be. Once considered to be of great social and skillful importance, it has lost popularity through the years, with the focus of the general public shifting instead towards other forms of art. It seems that modern-day portrait art simply needs to take on a more exciting presentation for it to be appealing to the masses.

Seattle artist Chris Crites manages to address this problem by creating portraits of an uncommon breed. Rather than creating pieces for aristocrats or famous stars, he chooses to paint the lowly and the unloved by society. He paints deviants. And he paints them in bold colors. Over ten years ago, Crites came across a book containing Los Angeles mugshots from the 1940s. Each of the mugshots was accompanied by nothing more than a booking charge, and as a history buff, Crites became intrigued by these individuals. “I couldn’t stop wondering what the real story was,” he explains. “Been obsessed with mugshots ever since.”

“I can’t really explain why it is that I focus my art on such deviant topics, other than maybe that they are such a draw [because they are] the deviancy that appeals as a dark side to our civilized side,” says Crites.

It seems only appropriate to pair such deviant subject matter with an atypical artistic approach. After all, Crites’ pieces are not photo-real Rembrandts or goofy illustrated caricatures. They fall somewhere between the highly illustrated and the photo-real — living off of shade and contrast, but thriving off of color theory. For his style, preparation is of the utmost importance.

“I can’t really explain why it is that I focus my art on such deviant topics, other than maybe that they are such a draw [because they are] the deviancy that appeals as a dark side to our civilized side.”

First is attaining the images of the subject matter. For his mugshots, Crites owns a few books — mostly filled with older images from the 1800s — but he has found an even better resource in the Washington State Archives. Government records, including criminal information, are public domain and paid for by tax dollars, which makes them accessible to Crites. He visits his local wing of the Archives and quite literally digs through boxes of photos until he finds the perfectly unanticipated individuals he’s looking for.

“They allow me to go in there and bring my laptop and a scanner, and they bring out big boxes of mugshots,” Crites explains. “Each one’s got like seven hundred mugshots in it, and I just sit there for hours. I have to go through and be like, ‘Oh, this is good,’ and scan it.”

Crites has been to the Archives four times. Despite the fact that some images are on slides or out of focus, his potential subjects are still so plentiful in number that he has room to be selective. By working only with criminal subjects from between the 1890s and 1950s, Crites purposely reduces the likelihood of art patrons recognizing someone they know in his works. He doesn’t even want the possibility of painting someone’s uncle or grandpa and being faced with legal trouble.

Even the most basic of crimes like burglary and theft are worded differently from decade to decade, so Crites has lists of crimes from certain time periods to help aid with the description process. Once the subject is chosen, Crites draws a loose sketch on his medium of choice. His original photograph is then adjusted and contrasted in Photoshop so that there is enough definition for him to work with. Not unlike a vector artist might do when illustrating a photograph, Crites pulls five clearly-defined shade groups out of each photograph. Those shade groups are then used as a guideline for his paintings, and five colors fill in the shade groups via a kind of paint-by-numbers approach. Don’t be fooled, though, for this is no easy childhood activity. Using a 10/0 brush — just about the smallest brush you can find — Crites paints his pieces color by color, square by square.

“I don’t do any overpainting or any underpainting, so each color goes down by itself,” describes Crites. He details one piece which was completed with great difficulty and time that features the leg of a female model wearing fishnet stockings. “I work from dark to light, so I had the fishnet [stocking] down first, and I had to go into each diamond and fill it in by itself.

“I guess I have OCD,” he adds. And with the amount of detail that goes into his pieces, it’s hard to tell if he’s joking or not.

The results are sometimes psychedelic and sometimes comic-book-like. Color absolutely makes all the difference in Crites’ pieces, which are rather unpredictable from start to finish. Even Crites often has no idea what each finished product will look like.

“I just pull out my paints, pick five colors, and work from dark to light. It’s exciting because I never what the full effect will be until the colors are completely in. It’s an ongoing experiment with color,” Crites says. He is particularly drawn to painting with contrasting, bright colors, and his hefty bin of variously colored acrylic paints is proof. Crites originally started out painting on brown paper bags, and it became somewhat a staple of his work. The name of his website, www.bagpainter.com, is a reference to this. And while Crites still prefers brown bags as his primary medium, he’s looking to branch out as well. He sometimes works with wood, has recently begun working with watercolor paper and Okiwara paper, and hopes to work with a renewable wood created from sorghum husk.

“Did you ever see the Body Worlds exhibit? This stuff is weird. It looks like a cross-section of flesh,” Crites explains, describing the texture of sorghum husk. “I want to start painting on that, because it’s just so weird- looking.”

Also on the list of potential mediums Crites hopes to work is plastic bags. He has also considered taking up screenprinting again so that he can start create one image in numerous colors. Lastly, he hopes to begin creating sculpture art — 3D busts of mugshots which are then painted brightly, as he does with his paintings. Despite the expense of creating work, framing it, and shipping it to other states, Crites continues to participate in out- of-state shows, with an upcoming show in Portland, Oregon and one in Omaha, Nebraska.

“I love Portland. The last time I showed there, I think I only sold two pieces, but the response was amazing; I think it was the biggest turn-out I’ve ever had for a show. That was surprising,” he recalls happily.

For Crites, a full-time artist and part-time gallery curator, risks like participating in out-of-state shows are no doubt taken, but the pursuit of art as a full-time profession absolutely has to be paired with business savvy as well. Artists often shun the business side of art, hoping that their talent alone will take them to the top, but Crites is just as much a businessman as much as he is an artist — if not moreso.

“I can’t really understand when people say they can’t do the business side of it. It’s like doing your taxes. You have to figure it out,” states Crites. “If you don’t do it, who’s going to do it? If you’re not out there making it happen, it’s not going to happen. You can’t just be creating beautiful work in a vacuum, hoping things will happen.”

“That’s what’s funny about art. Some people don’t really realize that if you’re going to do it full-time, like I am — how much business it is. It’s over 50% business,” he continues. It’s business, and it’s work, but it’s a job. I love it, and I wouldn’t want to be doing anything else, but it’s all work.”