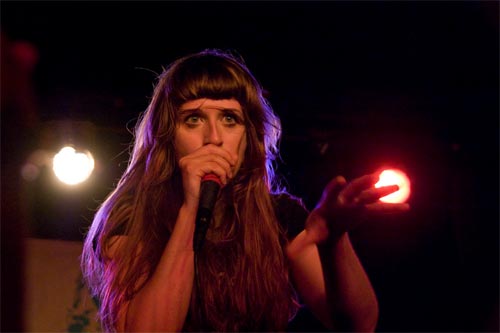 More than a year ago, I was introduced to the raucous electro-indie-punk stylings of Duchess Says. They represented, to me, the perfect hybrid of mainstream dance rock and teen center electro, and in my book, they had the perfect recipe for success. Their song “Black Flag” seemed an automatic indie hipster staple, provided the hipsters ever got wind of it. And while I did in fact hear “Black Flag” a few times in hipster-certified joints, Duchess Says’ music seemed largely lost on the general public, and as a result, they seemed never — except for one time when I was out of town — to tour the west coast.

So, at CMJ this year, I made a special point to see Duchess Says at the M for Montréal showcase at Arlene’s Grocery, a former Puerto Rican grocery store turned bar and venue in Manhattan’s Lower East Side. M for Montréal is a collective that primarily throws shows in their Canadian homeland but occasionally takes the party to the road via their appropriately named M on the Road. This particular evening’s lineup boasted sets by Silly Kissers, Beast, Think About Life, We Are Wolves, Malajube, and lastly, Duchess Says.

I missed the first two bands, but 8:00pm’s Think About Life was, to my surprise, the band that seemed to pull in the most patrons of the night. A large percentage of the crowd consisted of French-Canadians, and having just visited Montreal myself two days prior, the commonplace of French speakers seemed perfectly natural to me. Nonetheless, it must have been a bit of a surprise for some, and even the bands themselves more often than not spoke in French.

Despite being in the middle of the lineup, Think About Life was so successful in their crowd-riling, dance-inciting ways that they even played an encore. Their latest album, Family, was just released last month in the United States, and is a good combination of !!!-esque funk and jazz meets indie rock. Energetic, witty, and personable, their live show was engaging, and I found out quickly that French-Canadians seem to like to get down when the timing is appropriate.

Next up was We Are Wolves, and I couldn’t help but mentally make a note that it was yet another band with a confusing mixture of animals and words in their name. The trio played generally straight-forward, well-rounded rock accented by vocal distortions, keyboards, and a drummer who never sat down. They certainly had very catchy songs in tracks like “Walking Commotion,” but what amused me most was the pedal collection of vocalist and guitarist Alex Ortiz. He had probably around seven pedals, and none of them were secured or mounted whatsoever; they were free to flap around as the band ambled around onstage, but somehow, they remained remarkably untouched.

Canadian indie rock favorites Malajube were up next, bringing their signature style of indie pop rock that at times melts into post-rock territory. Tracks like “Ursuline” began with delicate, child-like piano and soon took a nosedive into driving, airy vocals and urgent drum beats. “Porte Disparu” featured a theatrical, ditty-like piano backing and emotions that veered from cheerful to chaotic with ease. At moments during Malajube’s set, I felt a bit of disappointment in the fact that bands like Malajube aren’t what the mainstream radio racket consists of. Malajube have all of pop sensibility and introspective moments mega-bands like Coldplay have, but they seem to have so much more in terms of songwriting and imagination. Their set was enjoyable, and certainly made me want to know more about their music. Last on stage was Duchess Says. Even though the crowd had mostly cleared out by the time their set started at midnight, and even though they had massive sound check problems which rendered keyboardist Ismaël extremely visibly furious, Duchess Says delivered. First off, let me say that I was completely off the mark in my expectations. I was expecting a thrashy, wild female vocalist — like a female Ozzy Osbourne, maybe — and even moreso when the M for Montréal emcee described the band as “wilder than wild” and guaranteed that their performance would be like nothing us concertgoers had ever seen before.

Both of these statements turned out to be true, although Duchess Says’ brand of wild is quite atypical. Instrumentally, on-point drumming, extremely engaging synths, and buzzing basslines all compiled to form a solid core as the band played a big portion of their 2008 release, Anthologie Des 3 Pechoirs. All members were equally useful in their contributions to the band’s intense sound, and the intermingling of distorted keyboards with the equally distorted vocals and bass — to the point where it was hard to pick out each instrument in its pure form at times — was an absolute delight to witness firsthand. And though keyboardist Ismaël looked bored out of his mind the entire set, it was his instrumental contribution that was the most fascinating.

And then we have vocalist Annie-Claude Deschênes, who had been hiding backstage during the band’s sound check. At showtime, she emerged like a dervish possessed, twisting her arms every which way and rolling her eyes into the back of her skull. But one could tell by her perfectly curled hair and girly makeup that she had a cute side to her, and that cute side definitely emerged as the night went on. Soon she was propelling herself into the crowd, poking and prodding at random concertgoers as if they were zoo animals. She picked out one particularly hefty individual from the crowd, told him that he was the best, and swung around the room with him like a kid in a playground. But after that fit, Deschênes was soon rolling around on the ground in spilt beer, and the mixture of the cute with the chaotic became a definitive mark of her stage presence.

To me, it seemed Deschênes was clearly performing as a slightly loony character when onstage, but either way, Duchess Says rendered the crowd simultaneously amused and speechless.