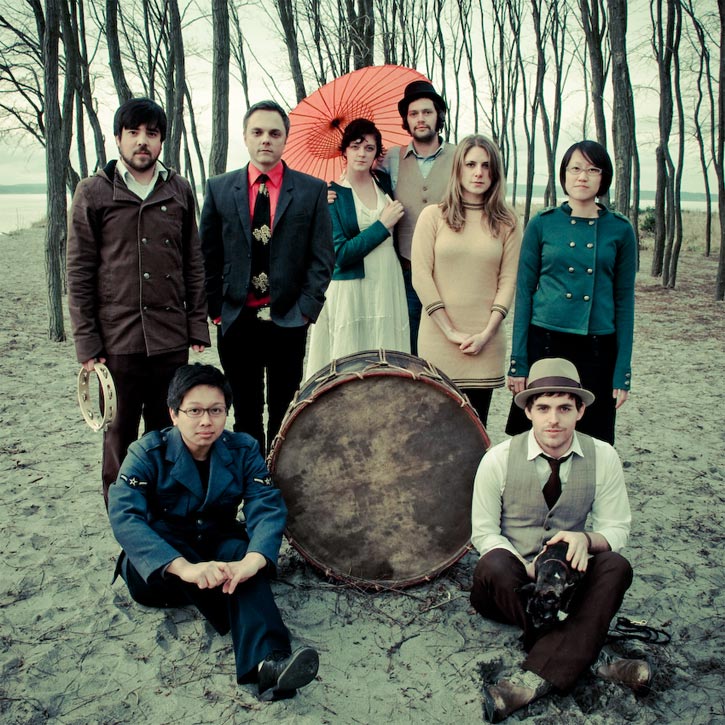 “I think the only time I feel completely comfortable with who I am and with what I have to say is when I’m playing music.” — Tomo Nakayama

Tomo Nakayama’s band, Grand Hallway, has had their fair share of print. If you search for them, you’ll find glowing review after glowing review, praising the band’s superhuman ability to melt even the coldest, most jaded critic’s heart. Nakayama has been said to have the “best voice in Seattle,” and their shows are described as breathtaking and emotional; so why is it that the Seattle band’s bearded brethren are busting onto the national scene while Grand Hallway languish as local secrets? If their new album, Promenade, is an indicator of anything, Grand Hallway won’t remain a secret for long. Their first full-length, Yes is the Answer, was a solid little gem, full of lilting melodies and melancholic arrangements. Fans of Nakayama’s previous band, Asahi, were both pleasantly surprised by his songwriting depth and lyrical prowess. It garnered plenty of local attention, earning spots on many local writers’ best-of-year lists, but not much more. And while the first album was more of a proof-of-concept, Promenade takes the first steps to fully realizing the potential of Grand Hallway.

“For the first record, I was really trying to change the way I thought about songwriting — trying to write exclusively on piano. It was more of a musical challenge to myself, and as a result it felt a little more… labored, in retrospect,” describes Nakayama. “But for the new record, I tried to make it as straight-forward and direct as possible.”

Since their first release, Grand Hallway has lost and gained members, changing not only how they play their songs but allowing Nakayama to explore new dynamics and textures in his songwriting. Joel Harmon of Sleepy Eyes of Death and Kevin Large of Widower are additions to the new rhythm section, playing drums and bass, respectively. Chris Zasche of The Maldives and Widower and Shenandoah Davis bring added musicianship, playing instruments such as slide guitar, glockenspiel, and accordion.

“Stylistically, I think [having more members] determined the direction of the songs. I usually have the arrangements of the songs worked out ahead of time before I bring them to the rest of the band, but each member contributed [his/her] personality to the songs,” says Nakayama. “I don’t think I really realized this, though, until I started playing with the rest of the band.”

Promenade is a workshop in textures, combining indie chamber pop sentimentality, raucous sing-along lyricism, and tinges of folk and country to create something so dynamic and engaging it’s almost a disservice to classify the band simply as “orchestral pop.” Every song on the album is an epic contained within itself, whether it be the chaotic hum of “Sirens,” the joyous chorus of “Raindrops,” or the cheers at the end of “Happy New Year.” Promenade may be one of the most engaging, most enjoyable pop albums to come out of Seattle this year.

Flowing from themes of comfort and love and innocent crushes to the pains of loss and uncertainty, the album seems to progress in a very specific manner. However, though the album does seem to have a thematic structure applied to it, Nakayama swears that it wasn’t intentional. “I didn’t have any concept in mind while I was writing these songs; it just came after the fact. I never know what I’m writing about until I’m in the process of writing, and it’s only after we’ve recorded it and I’ve had a chance to step away from the song that I see the themes that tie them together.

“[The album] is about two really specific relationships I went through,” Nakayama continues. “It’s funny because the loss part came before the falling in love, but we flipped it around for the album… It seems like there are certain patterns in relationships that we repeat, and there are certain arcs that our lives seem to go through, and it made sense as a whole.”

But, as any fan can tell you, the recorded product is only a small part of Grand Hallway’s identity. Their live performances are steadily winning over legions of fans, impressing audiences with their strong musicality as well as the sheer power of Nakayama’s voice. Since landing a slot at this year’s Sasquatch Festival, Nakayama and company have opened for the likes Robin Pecknold of Fleet Foxes and The Helio Sequence, playing to sold out crowds and giving it their all every time.

“I think the only time I feel completely comfortable with who I am and with what I have to say is when I’m playing music.”
— Tomo Nakayama, Vocalist and Songwriter for Grand Hallway

There’s very much a direct link between Nakayama’s emotional state and his performances. It’s inherent to him as a musician to allow himself to release during his performances. For instance, Grand Hallway’s appearance at fifth anniversary of the Seattle venue, Neumo’s, was filled with context. “[The Neumos show] was intense because it was the day I went to my grandpa’s funeral, and I went straight from the funeral to the show. It all happened so fast; I didn’t feel like I could… grieve at all,” recalls Nakayama. “I have a pretty big family, so everybody was super emotional and freaking out, and I felt like I was outside of the whole experience, but then when I got to the show and started playing, I felt like I could open up and really grieve.”

The locals were impressed, and Grand Hallway was rewarded with a spot in Seattle’s age-old Bumbershoot Festival. But again, this was only by the skin of their teeth. “We submitted [our music] at the beginning of the year, along with our drummer Joel who plays in Sleepy Eyes of Death, and they got accepted a couple months before we did, so I had pretty much given up on being accepted,” says Nakayama. “But it just came out of nowhere. I was pretty happy when it happened; it’s a pretty big milestone for the development of the band.

“Bumbershoot’s something I’ve been going to since a kid, and it’s kind of an institution. It’s fun to play for people we wouldn’t normally play for, outside of rock clubs and the neighborhood scene and what not.”

Of course, this presented the band with a whole new problem. They planned to make their CD release party a grand affair, but how could it possibly top playing at one of Seattle’s most venerable events? How could they possibly go bigger? Simple. Play the songs as they were meant to be heard, with a full orchestra behind them.

“It was one of those lucky moments of serendipity where, Alina, our violinist, had mentioned Grand Hallway to Scott Teske who conducts the Seattle Rock Orchestra, and he looked us up on MySpace and contacted us and asked if we wanted to play with the orchestra,” explains Nakayama. “Just timing wise, it worked out perfectly.”

A record release performance backed by an orchestra would need a fitting venue. Fortunately, the band’s connections came through yet again, and they set to play at the Fremont Abbey, a gorgeous non-profit venue residing in a renovated church. “They have a series called The Round — like a singer-songwriter event they do monthly… I played a couple [shows], so I know the booker at the Abbey through that,” Nakayama says. “He was super excited with the orchestra and everything, and they’ve been really supportive.”

Practicing with an orchestra was a thrilling event for Grand Hallway. “Shenandoah and I took the string parts that Alina and Jaclyn played on the record, and we expanded on them and arranged them for the orchestra,” describes Nakayama. “It’s an amazing feeling playing with twenty other people, and them playing exactly what you wrote for them. It’s like an out-of-body experience, just being carried by the music, and its… just really awesome.”

The release party promptly sold out, and the performance was indeed epic. The incredibly unique and controlled vocals of Nakayama painted the inside of that church with it’s warm glow, and the orchestra was pitch perfect, adding an even more lush texture to the band’s already intense performances. The children’s choir alone provided the audience with enough cuteness to last a lifetime, and not only the audience, but the band members themselves were on the verge of tears due to the sheer beauty of the evening.

“I think the only time I feel completely comfortable with who I am and with what I have to say is when I’m playing music,” reveals Nakayama. “I try to stay open to the moment and whatever is going on. I think everyone in the band is the same way… I don’t think any two of our live performances are the same; there’s always some variable that affects us, and that’s what makes it interesting. We’re not just a technical pop band; we don’t thrive on precision. It’s about just being in the moment and improvising when we feel like it and feeding off of each other’s energy.”

If you don’t live in Seattle and you want to hear Grand Hallway at it’s best yet, don’t worry. The band plans on embarking on a West Coast tour this fall and a European tour possibly to follow, though it’s not easy to get all eight members aligned properly all the time.

“Everybody’s really busy with multiple projects, and everyone’s got different interests, but right now there’s a good balance and it’s really fun playing music with everybody,” says Nakayama. “We’ll try to get that going as long as possible.”