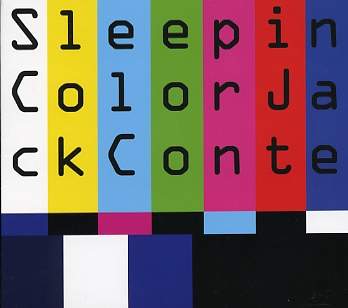 There is a lot to be said about Jack Conte, and the vast majority of it is at the tip of my tongue and going nowhere fast. For a five-song EP, Sleep in Color is absolutely packed with things to listen to. I have a hard time listening to it because I feel like I have to do nothing but listen. It feels like a movie — so well-thought out and layered that I don’t know what to think or what it’s trying tell me. The disc is a little old-school proggy meets new-school electro — but not too much. Mostly, it’s layers and layers of normal instruments and vocals; his Myspace page advertises his music as “electronic accoustica,” which fits.

Is it weird to think this album sparkles? Because it does. It sounds like glitter. Conte’s become something of an internet phenomenon, releasing videos on YouTube that he calls “Video Songs,” where you don’t hear anything that you can’t see. Every video is cut and pasted and layered, and at some point, every instrument he plays is shown on screen. And yeah, he plays everything — guitar, piano, accordion, and, at certain points, something that looks like it might be a dryer vent (a long silver tube thing that he sings into while wobbling the end from side to side, producing a vocal effect I can’t quite pigeonhole). This is 2009’s version of a one-man band: extremely listenable (perhaps to a fault) and so very awe-inspiring.