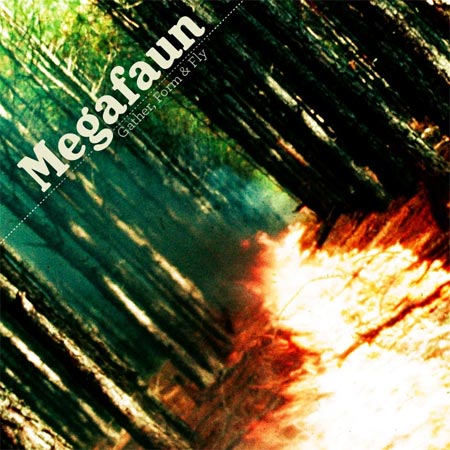 Listening to Megafaun for the first time is like seeing a Disney movie on acid… for the first time. There is so much genre jumping, and so much background noise, it would throw the casual listener for a very large loop.Gather, Form, & Fly is Megafaun’s sophomore release, and their first for Portland’s fledgling label, Hometapes. Megafaun’s debut, Bury the Square, came out on Table of the Elements, a label well known for fostering up and coming eccentric groups. Hometapes proves to be similar, and seems like a good home (no pun intended) for the hyper-experimental Megafaun. Gather, Form & Fly is peppered with random noise and nature sounds, but it works out perfectly for the folk-fusion mood they are setting.

The Durham, NC-based band has amassed a “Mega” following through blogs and through numerous tours with the likes of Akron/Family, The Rosebuds (who appear on this record), and many more bands. Former bandmate Bon Iver’s career has sky-rocketed as of late, and with a record like Gather, Form & Fly, it is unclear if Megafaun is eager to follow that path. This is not to say that the record is not worthy of note. It is a beautiful piece of art (yes, art) only enhanced by their musical friends and fantastic ideas of how an album should (and should not) be constructed.

The album definitely runs the gamut of what is traditionally considered folk, from gentle acoustic tracks (“Bella Marie”) to full on sing-a-long choruses (“The Fade,” “The Darkest Hour,” and especially the lovely “Guns”). At some points, there is a throwback feel to the more optimistic ’60s folk era, but the experimental aspects do away with that quickly. At times calming and rhythmic, the mostly instrumental “Impressions of the Past” is a good summary of their always well-orchestrated style. Gather, Form & Fly is not a vanity project; it is a full band affair, with everyone flexing their musical muscles. No instrument is left behind, from slide guitar to violins and cellos, and even the quieter moments (“Worried Mind”) are well thought out.

Admittedly, the rowdy tracks are especially enjoyable (“The Process”), and the soulful, bluesy tracks (“Solid Ground”) feel especially genuine. At their peak, they do mournful, touching folk the best (“The Longest Day”), and seeing the genre at its modern day best makes this album worth checking out the most.